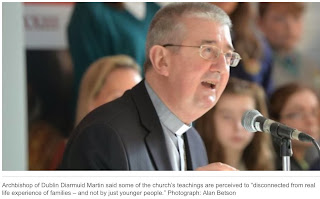 Catholic teaching on contraception, cohabitation, same sex relationships, the divorced and remarried is “disconnected from real life experience of families – and not by just younger people”, said Archbishop Diarmuid Martin last night. In general, church teaching in those areas was found to be “poorly understood . . . poorly accepted” by Catholics in Dublin, he said at a meeting in Holy Cross College, Clonliffe. He was commenting on findings of a consultation in the diocese. Similar consultations took place all over Ireland at the urging of Pope Francis, in advance of the Synod of Bishops on the family in Rome next October. Archbishop Martin is the only Irish bishop to disclose findings in his diocese. German and Swiss bishops have released results of their consultations. They also found that substantial numbers of Catholics disagreed with church teaching on divorced and remarried Catholics, cohabitation, homosexuality and artificial birth control. The archbishop said in the Dublin consultation “many said that the teaching appears as not practical in relation to people’s day-to-day struggles, being at best an unrealistic ideal. There appears to be a ‘theory-practice’ gap,” he said. On same sex relations “some saw the church’s position as being purely negative and judgemental”. “Many felt that there should be some way of civilly recognising stable same-sex unions, but there was a clear hesitancy, uneasiness and opposition with regard to marriage for same sex unions,” he said.
Posted by Mike at 9:53 AM