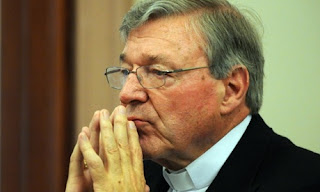 Claims by Cardinal George Pell that he had little to do with the conduct of the notorious Ellis case have been flatly contradicted by the church’s own lawyer in dramatic testimony on Tuesday to the royal commission into the institutional response to child abuse. “I didn’t have any doubt the cardinal was being kept up to date on developments in the case,” Paul McCann of church lawyers Corrs, Chambers, Westgarth told the commission. “He was giving instructions on various steps.” John Ellis sued Pell and the trustees of the Catholic church in 2005 after being refused compensation for his abuse at the hands of Father Aidan Duggan. After a hard-fought contest, Ellis lost. The decision made legal history, confirming the Catholic church in Australia is unsueable. For years the church demanded Ellis pay its legal costs of $750,000. When a frail Ellis met Pell for the first time in 2009, he came away immensely relieved to think the cardinal had not been “in the loop” when decisions were made on fighting his case. After the meeting, the cardinal’s secretary, Dr Michael Casey, wrote to Ellis apologising for the rough time he had had during the litigation. “Cardinal Pell wants you to know that although he believed that your claim was for many millions of dollars, he now knows that the truth of the matter was … an “offer of compromise” submitted to the Archdiocese in December 2004 of only $750,000. “Further, the Cardinal was distressed to learn that this submission was never responded to by the Archdiocesan lawyers. For this he apologises. Once again the Cardinal reiterated that he will do all in his power to ensure that this sort of legal abuse is never repeated again.” Even before McCann entered the witness box at the commission to confront those claims, Pell’s then vicar-general, Monsignor Brian Rayner, gave evidence he had the cardinal’s permission to offer Ellis $25,000 and later $30,000 in the early days of the dispute. “I did not have authority to make decisions about amounts of money,” he told the commission. Rayner insisted he had also alerted Pell to an early counter-claim by Ellis and his wife for $100,000. Peter Gray SC, counsel for Pell, has indicated the cardinal will deny those claims. Rayner said: “His recollection of events is not clearly accurate.” Taking the stand shortly before lunch, McCann told the commission he received instructions from Casey on each of the strategic decisions involved in fighting Ellis’s claim. These included the decision not to mediate at the outset, to reject Ellis’s final request for $750,000 and to deny – despite the findings of the church’s own investigator and admissions made to Ellis by Rayer and others – that he had ever been abused. Under questioning from the commissioner, Peter McClellan, McCann said he did not doubt the cardinal was kept up to date with and was giving instructions on these steps. Pell is expected to take the stand on Monday.
Posted by Mike at 2:15 PM