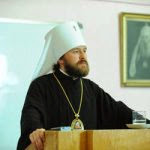 Moscow (AsiaNews) - The Moscow Patriarchate strongly condemned the Greek-Catholic (Uniate) Church in Ukraine for "meddling" in politics, in the current crisis in the country. For its part, Russia continues to accuse the Ukraine of "religious intolerance," a charge the latter sharply rejects, noting instead how all religious denominations have come together to oppose violence and express support for Europe. For Metropolitan Hilarion, head of the Synodal Department for External Church Relations of the Moscow Patriarchate, Sviatoslav Shevchuk, major archbishop of the Ukrainian Greek Catholic Church, and his predecessor, Lubomyr Husar, took a "very clear position from the beginning of the civil conflict, which grew unfortunately into an armed bloody conflict". In his view, the Uniates not only advocated integration with Europe, "but even called for Western countries to intervene more decisively in the situation in Ukraine." Speaking on The Church and the world, a programme on the Russia-24 TV channel, Hilarion also noted that "Archbishop Sviatoslav Shevchuk and [. . .] Filaret (Denisenko) even went to the United States, [. . .] to the State Department and asked for US intervention in Ukrainian affairs." Excommunicated by the Moscow Patriarchate, Filaret is the head of the breakaway Ukrainian Orthodox Church-Kyiv Patriarchate. In early February, Archbishop Shevchuk spoke before the US Congress. On that occasion, he said that the Ukraine situation transcended politics and asked for US mediation to resolve the crisis. Conversely, for Hilarion, the Greek-Catholic Church is a major obstacle in relations between the Moscow Patriarchate and the Holy See. The Orthodox, he said, have always perceived the Uniates in a very negative light, "as a special project by the Catholic Church," because "they dress like Orthodox, follow Orthodox rituals, but are in fact Catholic," which gives them and the Vatican a certain leeway. When he asked a Catholic official for an explanation about the show of support from the Greek-Catholic Church for the breakaway Orthodox Church, the only answer Hilarion said he got was "We do not control them." For his part, Shevchuk, who recently met with Pope Francis, bemoans the disappearances of people in Ukraine, who were "abducted and tortured" by the Berkut, the special police in the government of ousted president Yanukovych. Moscow and Kyiv also continue to trade barbs over religion. The Ukrainian Ministry of Culture has rejected Russian accusations of "religious intolerance" with regards to alleged threats and seizure of parishes that are under the jurisdiction of the Moscow Patriarchate in Ukraine. According to the ministry's Religious Affairs Department, no such actions have taken place. On the contrary, during protests at Maiden (Independence) Square, "all the churches, including the Ukrainian Orthodox Church," came out to defend the people and show their support for a pro-European orientation in the country's development. Likewise, Kyiv has denied claims by the Moscow Patriarchate and the Russian government that the country is in a civil war. Instead, Russia continues to be under diplomatic pressure to avoid a wider Ukrainian crisis, following its annexation of the Crimea. In fact, US President Barack Obama is in Brussels for a summit with EU leaders Barroso and Van Rompuy to discuss possible new sanctions.
Posted by Mike at 6:29 PM