KANSAS CITY, Mo. — The charge is only a misdemeanor, but if prosecutors are able to win a conviction against Kansas City Roman Catholic Bishop Robert Finn, they could be opening up a whole new front in the national priest abuse crisis.

Finn is accused of violating Missouri’s mandatory reporter law by failing to tell state officials about hundreds of images of suspected child pornography found on the computer of a priest in his diocese.

Experts say a criminal conviction against Finn, the highest-ranking church official charged with shielding an abusive priest, could embolden prosecutors elsewhere to more aggressively pursue members of the church hierarchy who try to protect offending clergy.

“Cases can sit like land mines in files for a long time and suddenly come to light,” said Matthew Bunson, a senior fellow at the St. Paul Center for Biblical Theology and co-author of a book, “Pope Benedict XVI and the Sexual Abuse Crisis: Working for Reform and Renewal.” ‘’Those cases may ultimately involve leaders in the church.”

Finn and the Catholic Diocese of Kansas City-St. Joseph each were charged last year with one count of failing to report. The case involves the Rev. Shawn Ratigan, who remains jailed on state and federal charges accusing him of producing and possessing child pornography. Both have pleaded not guilty, and a judge is scheduled to hear multiple motions in the case Tuesday, including one to dismiss the charges.

“We do not believe that either the facts or the law support a finding of guilt on the misdemeanor charges, and we look forward to a just and fair resolution of them,” the diocese told The Associated Press in an e-mailed statement.

Finn has acknowledged being told in December 2010 about hundreds of photographs of young children found on Ratigan’s laptop computer. Many of the photos focused on the crotch areas of young children who are clothed, though one series showed the exposed genitals of a girl thought to be 3 or 4 years old.

The bishop also has acknowledged that a parish principal warned the diocese of suspicious behavior by Ratigan, including that he was taking compromising pictures of children and let them sit on his lap and reach into his pocket for candy. Those warnings occured more than six months before the photos were found.

Instead of ordering the photos to be turned over to police, or telling the Missouri Children’s Division about them, Finn sent Ratigan out of state for a psychiatric evaluation. When Ratigan returned to Missouri, Finn sent him to the Sisters of St. Francis of the Holy Eucharist, where he would say Mass for the sisters and be away from children.

Finn told a grand jury he thought Vicar General Robert Murphy was the diocese’s designated reporter. Murphy testified that even though he was head of a team formed to respond to claims of child sex abuse by priests, he had never been trained on being the mandatory reporter, nor officially assigned that duty.

Tuesday’s motions hearing comes a day after the trial begins in Philadelphia in a case involving Monsignor William Lynn, the first U.S. church official charged with child endangerment for keeping accused priests in the ministry.

Full article from Associated Press
Posted by Mike at 12:01 PM No comments:

In Pa. abuse trial, a window into church practices

PHILADELPHIA (AP) — A landmark priest-abuse trial opening Monday in Philadelphia may unveil the cryptic operations of the Roman Catholic archdiocese and detail how child sex-abuse complaints were buried for decades in secret archives adjacent to a glorious cathedral as the priests they named went unpunished.

Monsignor William Lynn is the first U.S. church official ever charged with endangering children for allegedly failing to oust accused predators from the priesthood. But he may not be the last.
Philadelphia prosecutors say he helped carry out "an archdiocesan-wide policy ... (that) was criminal in nature." And they've hinted they could charge others when the trial ends.
Civil lawyers believe the trial will help them refile priest-abuse lawsuits that were thrown out in Pennsylvania because of legal time limits, or persuade the state legislature to open a window for filing child sex-abuse claims.

"The evidence that has come out about the conspiracy and the cover-up and the level of officialdom involved in it is going to help us," said lawyer Jay Abramowitch, whose priest-abuse lawsuit involving 18 accusers was thrown out by the state Supreme Court in 2005.

Also on trial is the Rev. James Brennan who, like Lynn, pleaded not guilty. Last week, a third man, defrocked priest Edward Avery, 69, pleaded guilty to involuntary deviate sexual intercourse and conspiracy to endanger the welfare of a child. He was sentenced to 2½ to five years in prison and ordered to surrender within 10 days.

Lynn remains the focal point of the trial because the 61-year-old was the secretary for clergy at the Archdiocese of Philadelphia from 1992 to 2004.

Lynn argues that he prepared a list of 37 accused priests in 1994, and sent it up the chain to Cardinal Anthony Bevilacqua — only to have Bevilacqua have it shredded. The cardinal died this year, but his videotaped deposition could be played at trial.

The trial will be followed by concerned Catholics across the country, including some who say their lives were destroyed.

"It gives me hope that it's going to raise public awareness, and it's going to expose the church — what they knew, when they knew it," said Art Baselice Jr. of Mantua, N.J., a retired Philadelphia homicide detective. His son, Arthur III, overdosed in 2006, after his civil suit accusing a Philadelphia priest of abuse was thrown out.

Lynn faces two counts each of conspiracy and child endangerment and up to 28 years in prison if convicted.
.........

The trial is sure to be painful for priests across the archdiocese as well. Pastors will testify against church leaders, complaining they were never told when accused priests were assigned to their parishes.

The Rev. Chris Walsh started the Association of Philadelphia Priests last year, so the 800 priests in the archdiocese can share support and information.
"The priests want the same thing as the lay people," Walsh said Thursday. "We want to know what happened. And, if possible, why it happened.

"The gospel says the truth will set you free. Let's find out what the truth is."

Full article at Associated Press
Posted by Mike at 11:52 AM No comments:

The Pope has taken the unusual step of setting up an internal, criminal investigation to identify the source of damaging leaks of compromising Vatican documents.

The inquiry will seek to punish the insiders who leaked the papers, whom the Vatican hierarchy regard as "disloyal and cowardly".

Pope Benedict XVI had been "hurt" by the leaks, said Archbishop Angelo Becciu, the Vatican's deputy secretary of state and third most powerful Vatican figure, in an interview with L'Osservatore Romano, the city state's daily newspaper.

Documents leaked to the Italian press over the last few weeks have shed light on dark power struggles between senior cardinals, alleged corruption and nepotism in the running of the Vatican administration, and a mysterious prediction that the 84-year-old pontiff would die within a year, possibly as a result of an assassination attempt.

Msgr Becciu described whistle-blowers as "cowardly" and "deeply disloyal" and warned that they would face the full force of the law from Vatican prosecutors. They had abused the trust placed in them by leaking the documents, he said.

The investigation will be conducted by a tribunal and will probe all departments in the Vatican administration.

Msgr Becciu also defended the reputation of the Roman Catholic Church hierarchy, saying it was wrong to depict it as a hotbed of "plots and careerism".

full article at The Telegraph
Posted by Mike at 8:07 AM No comments:

"On that day, offer your sacrifice for the cause of religious liberty, that the Church may be granted the basic right to practice what she preaches, and for our political leaders, that their eyes may be opened to the rights of all Americans," the bishops said in a letter issued last week and read Sunday at some parishes in the Archdiocese of Philadelphia

The two-page letter was generated by the Pennsylvania Catholic Conference (PCC), a lobbying and advocacy group based in Harrisburg. Its members are the state's eight Roman Catholic diocesan bishops, the Philadelphia-based Ukrainian Catholic archbishop, and the Byzantine-rite archbishop, in Pittsburgh.

Archbishop Charles J. Chaput, head of the Roman-rite Archdiocese of Philadelphia, is president of the PCC and has been an outspoken critic of the White House's mandated contraceptive coverage, which he has called "flawed and dangerous."

While fasting on Fridays is a Catholic Lenten tradition, its use in a political controversy is without recent precedent, according to officials at the archdiocese and the PCC.

"We're asking Catholics who are already observing Lent to take it the next step."

Hill also said the effort was not an attempt by the bishops to embarrass President Obama in an election year. "We didn't start it. We didn't ask for this," she said.


full article at the Philadelphia Inquirer
Posted by Mike at 7:53 AM 1 comment:

Rabbi Arthur Waskow, the well known Rabbi who is founder and director of New York's Shalom Center, has this week condemned what he calls the Catholic Church's 'outrageous attempt to impose sharia law on the US government and the American public.'

Writing in the Huffington Post Waskow, one of the twenty most influential Rabbi's in the nation, clarifies that he is not speaking of Muslim sharia, but what he calls a Roman Catholic equivalent 'sharia' in regard to contraception.

The US Conference of Catholic Bishops (USCCB) is trying to impose on Americans of all faiths and beliefs who happen to work in Catholic-sponsored hospitals or university throughout the nation, Waskow claims.

Taking an increasingly hardline stand, the bishops have spoken of their 'religious oppression' even after the Catholic Hospital Association achieved a compromise with the Obama Administration, Waskow wrote. The bishops were still not satisfied even after they were assured that health insurance companies will pay for free contraception without involving the Catholic-sponsored employers who might object, hr added.

In Waskow's view the real threat to religious freedom is the attempt by the bishops to deny religious freedom to the employees of their own institutions - Catholics and otherwise - whose consciences are totally at peace with the use of contraception.

98 percent of Catholic women use artificial contraception Waskow notes, and the rate among non-Catholic women is 99 percent. Clearly they do not obey the teachings on sexuality from what he called the all-male, all-celibate hierarchy.

Recent revelations in the ongoing discovery phase of the Philadelphia criminal case against Msgr. Lynn revealed that a list of pedophiles and probable abuser priests he had compiled decades ago was ordered destroyed by then Cardinal Archbishop Bevilaqua. Msgr. Molly had kept a copy of this memo in a safe which was broken into upon his death. The Allentown Pa Morning Call recently revealed several of the original documents turned up by the proscecution including the note from Msgr. Molloy (1994)  that copies of the memo had been destroyed. One recipient of this note was Edward Cullen, later bishop of Allentown. 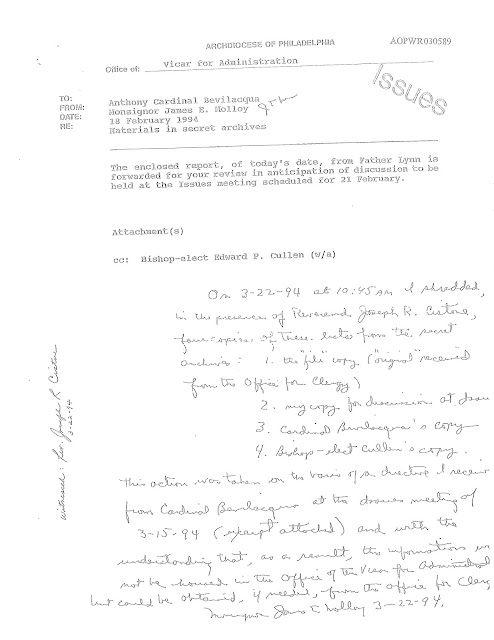 Later both the Cardinal and several other archdiocesan officials testified before a grand jury that they had no knowledge of abusive priests.

also reproduced below is the first page of the original memo from Msgr. Lynn. 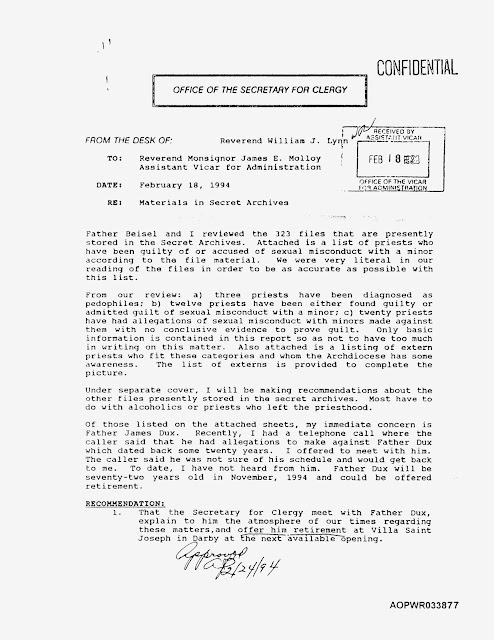 This verification of the policy of coverup and disregard of the innocent and untruth at the highest levels of authority in the Archdiocese where I grew up  is truly disturbing.

Further details and documentation at the Allentown Morning Call
Posted by Mike at 3:11 PM No comments: