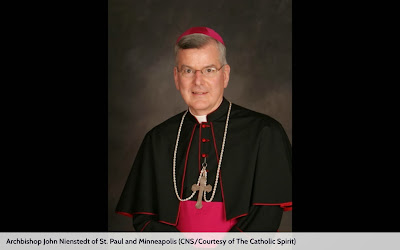 Prosecutors in the Twin Cities have declined to press charges against St. Paul-Minneapolis Archbishop John Nienstedt in relation to allegations of inappropriately touching a boy. Ramsey County Prosecutor John Choi announced Tuesday evening that an extensive investigation into the claim revealed insufficient evidence to prosecute. In mid-December, Nienstedt removed himself from public ministry after the archdiocese became aware of the allegation that the archbishop had touched the buttocks of a boy during a post-confirmation group photo session in 2009 at the Cathedral of St. Paul. The prosecutor's investigation found none of the other 11 people appearing in the photo had witnessed the archbishop touch the boy's buttocks or saw anyone react in a startled manner. It added that the boy did not report anything beyond a hand brushing against him and that such touching could happen unintentionally. Without clear sexual intent, the report said, charges could not be filed. "It also seems unlikely that the Archbishop, if he were so inclined, would pick that moment to sexually touch a random boy openly in front of another clergy member, a deacon, and numerous other confirmands while the confirmands' family members were preparing to document the moment in photographs," the report stated. The prosecutor's office noted that the decision related only to the abuse accusation against Nienstedt and that a broader examination into allegations involving the archdiocese are ongoing. As a result of the investigation closing, Nienstedt will immediately return to public ministry. In a statement posted on the archdiocese's website, the archbishop -- in his first comments since the allegation arose -- expressed gratitude for the investigation's findings and said he looked forward to returning in time for Lent and before Holy Week and Easter services. His suspension from public ministry prevented him from taking part in Christmas services. "While I look forward to my return to public ministry, I remain committed to the ongoing work needed to provide safe environments for all children and youth," Nienstedt said. "I continue to offer my prayers for all victims, their families and their communities, as well as to all who have been harmed by clergy sexual abuse. I once again offer my apology to all who have been affected by these terrible offenses." According to a three-page declination memo filed by Richard Dusterhoft, director of Ramsey County's criminal division, the allegation emerged during a lunch conversation between the boy's mother and a priest friend, who informed the police Dec. 16. Two days later, the boy underwent two days of interviews with police, telling them that Nienstedt had his hand on the boy's shoulder during a photo and then moved it down his back to the boy's buttocks. The boy told police he thought the movement was "creepy" but didn't feel violated and that he didn't think the incident was significant. He was not aware of other incidents. Interviewed by police on Christmas Eve, Nienstedt reiterated the stance he took in his Dec. 17 letter to Twin Cities Catholics, saying he neither touched the boy's buttocks nor remembered him. He speculated that perhaps another child touched the boy as a joke. A police investigation of the photo in question found Nienstedt's left hand on his crosier and his right hand on the boy's left shoulder. Eleven other people also appear in the photo, taken on stairs with the archbishop one step higher than the boy. That arrangement led police to conclude: "It appears from the photograph that the Archbishop would have to bend to reach the male's buttocks and that any such action would have likely have been witnessed by others present." Subsequent interviews with the other people in the picture found no one recalling seeing anyone touched. Frank Meurs of the Survivors Network of those Abused by Priests said the allegation sounded "pretty implausible from the start" but stressed that virtually all allegations should be met with the same level of seriousness. While Nienstedt won't face charges, he is set to face a line of questioning from victims' lawyers in three weeks. The Minnesota Court of Appeals rejected March 5 an attempt by the archdiocese to block depositions taken of the archbishop and former Vicar General Msgr. Kevin McDonough, the St. Paul Pioneer Press reported. The appeals involve a man allegedly abused by former priest Thomas Adamson.
Posted by Mike at 4:49 PM