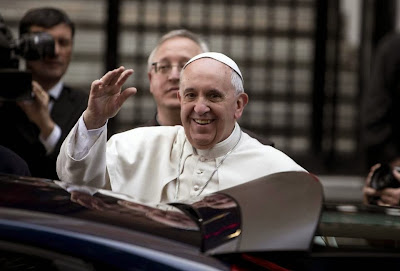 Pope Francis captured the imagination of the world within hours after his election a year ago through his flashes of humility, and that’s not just a PR facade. In Argentina, he was known as a “bishop of the villas,” referring to the vast slums that ring Buenos Aires, because he had a special love for the poor. Yet one should never forget that beneath that simple exterior lies the mind of a brilliant Jesuit politician. Some Argentines believe he may actually rival Juan and Evita Perón for the title of best set of political instincts the country ever produced. That savvy was on display again Saturday, when Francis rolled out the initial members for a new Vatican commission to lead the charge in the fight against clerical sexual abuse. Despite the generally glowing reviews Francis has drawn over his first year, there have been two streams of criticism that, if allowed to fester, could grow into serious headaches for the pontiff: -- Critics say he hasn’t engaged the church’s clerical abuse scandals with the same vigor he has brought to other problems. An American advocacy group recently raised questions about his response to five abuse cases in Argentina, while his comments in a recent Italian interview reminded some observers of the defensive rhetoric employed by church officials at the onset of the crisis. -- Francis has repeatedly called for greater roles for women in the church, but so far he has been more concrete about which doors remain closed rather than which may be opening: a firm “no” to women priests, for instance, and another “no” to women cardinals. When he recently created a powerful new finance council for the Vatican, he didn’t include a single woman among its seven lay members. In one swoop on Saturday, Francis took a significant step toward addressing both of those smoldering objections. On the abuse front, Francis signaled his commitment to reform by naming Cardinal Sean P. O’Malley of Boston as part of the team. While critics may raise objections about aspects of O’Malley’s record, no American bishop has a deeper experience of recovery from the abuse scandals and few prelates anywhere are more publicly identified with the press for accountability and transparency. O’Malley, in other words, brings instant credibility to the effort. Francis also showed sensitivity by ensuring that a victim was part of the team, in this case a well-known Irish campaigner for victims’ rights named Marie Collins. Among other things, Collins is known to have the ear of Dublin’s Archbishop Diarmuid Martin, who, like O’Malley, is a prelate known around the world for taking strong stands in favor of coming clean on the abuse scandals. Insiders will also note that Francis tapped a Jesuit, the Rev. Humberto Miguel Yáñez, to the body. He heads the moral theology faculty at Rome’s Jesuit-run Gregorian University. Yáñez is a Francis protégé, having been received into the Jesuit order by the Rev. Jorge Mario Bergoglio in the 1970s and having studied under the future pope. One way Francis signals his personal interest in a project is by naming an intimate to its team, as he recently did by naming one of his personal secretaries, Maltese Monsignor Alfred Xuereb, to the Vatican’s new finance ministry. The Yáñez appointment will be taken the same way, as a sign that this commission matters. As far as women are concerned, Francis has seemed to say that he wants them to play meaningful leadership roles in every capacity that doesn’t require making them priests. To date, however, he hadn’t offered any examples of what those roles might look like. He certainly has now: Of the five lay people Francis included among the leaders of the new anti-abuse commission, four are women. The result is that fully half the commission’s members are female. Beyond Collins, the other women are Hanna Suchocka, who served as Poland’s Prime Minister between 1992 and 1993, and who served five different Polish governments as the country’s ambassador to the Vatican; Catherine Bonnet, a well-regarded child psychologist in France who has written extensively on the trauma inflicted on children by sexual abuse and exploitation; and Baroness Sheila Hollins, president of the British Medical Association and a widely consulted expert on child development issues. Clearly, these women aren’t window-dressing. They’re accomplished advocates and experts, with deep experience of getting things done both in secular circles and in the church. Francis presumably tapped them because of their personal qualifications, but he can’t be blind to the fact that this also amounts to a down payment on his pledge to boost women’s roles. Granted, naming people to a commission is not, in itself, reform. It remains to be seen if this group can successfully ride herd on forces in the church still in denial, or help the pope hold bishops and other Catholic leaders accountable if they drop the ball. If the commission turns out to be a dud, Saturday’s announcement won’t be enough to save the pope from the disillusionment that will ensure. For now, however, the lineup card revealed by the pope not only amounts to a clear statement of seriousness about the abuse issue, but it also shows a deft political touch.
Posted by Mike at 9:34 AM