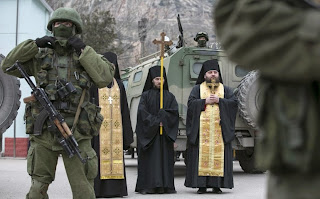 Moscow - As Russian troops massed on Ukraine's border and a controversial secession vote in Crimea approached March 16, Patriarch Kirill of the Russian Orthodox church called for prayers "that brothers of one faith and one blood never bring destruction to one another." Russia has prided itself on its revival of Orthodox Christianity after decades of Soviet persecution, but a war with the Ukraine could splinter the Russian Orthodox church. That church has its roots in Kiev, where Prince Vladimir baptized his people as Christians in 988, an event viewed as a cornerstone of Russian and Ukrainian identity. It has even deeper roots in Crimea, where, according to legend, Vladimir was himself baptized by Byzantine emissaries. The Ukrainian Orthodox church of the Moscow patriarchate, which has 12,500 congregations, is the largest of three Orthodox churches in Ukraine. It has some degree of autonomy, with a Synod of Bishops that elects its own members. However, the church's leader, currently Metropolitan Onufry of Chernovtsy and Bukovina, although elected by the synod, has to be approved by Moscow. In his sermon at the end of the service at Christ the Savior Cathedral in Moscow March 14, Kirill, who has been known for his support of Russian President Vladimir Putin, suggested that Ukraine has a right to self-determination. But he also stressed that it must not be trapped into a spiritual division from Russia. "What we are referring to is the Russian world, the great Russian civilization that came from the Kievan baptismal font and spread across the huge expanse of Eurasia," he said according to a transcript posted on the Moscow patriarchate's website. The "Russian world," or "Russky mir," has been an overriding theme for Kirill since he became patriarch in 2009, and it meshes with Putin's worldview, said Antoine Arjakovsky, director of research at the College des Bernardins in Paris and founder of the Institute of Ecumenical Studies in Lviv, Ukraine. "For them, democracy is a danger," he said in a Skype interview. "They invented a new mythology, the new ideology of Russky mir, of the Russian idea, which would invent a kind of new theology of politics." But for the churches in Ukraine, the protests that toppled President Viktor Yanukovych were also a galvanizing religious awakening and may lead to a seismic shift in church-state relations. Dramatic images of clergy with crosses standing between protesters and government forces went viral as the standoff escalated in January and February. "The majority of the Ukrainian churches followed a paradigm common to Eastern Christianity; they aligned with the state," said the Rev. Cyril Hovorun, a former chair of the Ukrainian Orthodox church's Department of External Church Relations who has also worked at the headquarters of the Moscow patriarchate and is now studying church-state relations at Yale Divinity School. "The churches in their majority on different levels supported the justifiable demands of the Maidan," he said referring to the square in Kiev where the protests took place. Greek Catholics, or Eastern rite Catholics who are loyal to Rome, were the earliest and most active supporters of the demonstrations, he said. Many of them come from Western Ukraine, on the Polish border, where the state and communist policy of persecution of religion under Soviet dictator Joseph Stalin was accompanied by forced conversion from Eastern rite Catholicism to Orthodoxy. Atheism never took hold. Yet during the protests, all of the churches "with a different pace realigned with the new agenda," Hovorun said, and prayer became an integral part of the protests, which also became, in effect, ecumenical meeting grounds. "Maidan, apart from being an important civil event, appeared to be an important religious event," he said. "There were prayers said every day in the morning and at night. It was a religious phenomenon apart from being a political and social phenomenon, and it was also an ecumenical phenomenon because Maidan actually facilitated many churches, many church leaders who had never really conversed publicly with each other." Andrei Zubov, a historian and expert in church-state relations at the prestigious Moscow State Institute of International Relations, was nearly fired earlier this month for writing an editorial that compared Putin's actions in Crimea to Hitler's Anschluss of the Sudetenland. He said that if events spill into war, a split between the Moscow and Kiev churches is inevitable. "Putin has started an uncontrollable process," he said in a telephone interview from London. Calls have been growing for an independent church that would unite all of Ukraine's Orthodox churches. (The other two are not recognized by the world's main Orthodox churches.) Zubov said that if relations between Russia and Ukraine continue to deteriorate, the patriarchate of Constantinople would eventually recognize a Ukrainian church. "Ukraine is the second-biggest Orthodox country after Russia," said Arjakovsky. One thing is certain: A united Ukrainian church could redraw the map of Orthodoxy.
Posted by Mike at 12:54 PM