Danica Coto Associated Press March 12, 2014 ARECIBO, Puerto Rico — First, the Catholic Church announced it had defrocked six priests accused of sex abuse in the Puerto Rican town of Arecibo. Then, local prosecutors disclosed that at least 11 other priests on the island were under investigation for similar accusations. 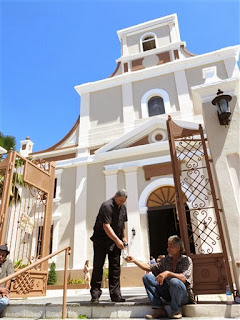 DANICA COTO | AP PHOTO In this March 2, 2014 photo, a man gives money to a beggar after Mass outside the San Felipe Cathedral in the Arecibo Diocese in Arecibo, Puerto Rico. Prosecutors are pursuing more than a dozen sex abuse cases in Puerto Rico, including those of six priests defrocked by the Diocese of Arecibo. Now, as U.S. authorities acknowledge that they, too, are looking into abuse allegations by priests on this devoutly Catholic island, many are reeling from revelations of abuse involving some of the U.S. territory's most beloved clerics. Puerto Ricans had largely been spared the lurid accounts of sex abuse involving the Catholic Church, and many had come to believe they were immune. But Barbara Dorris, a director with the U.S.-based Survivors Network of Those Abused by Priests, said the new reports mean it's likely the problem is much worse than previously imagined. "In general, these things tend to snowball because victims are afraid to come forward," Dorris said. "If the priests have been on this island for a while, it probably means that it's dozens upon dozens of victims out there." Puerto Rico Justice Secretary Cesar Miranda said last week that at least four dioceses are being investigated. He also warned he might file charges against church officials suspected of withholding information. He described the situation as "truly scandalous." "We are not going to rest," Miranda said. "We are going to capture them, we are going to process them and we are going to put them in jail." Allegations of sex abuse by priests are not new here, but the latest wave of investigations has dwarfed anything seen on the island of 3.6 million people, more than 70 percent of whom identify themselves as Catholic. "People want to believe in the specialness of the priests, in the power of the priests," said Richard Sipe, a California-based psychologist and former priest who is an expert on clergy sexual abuse. "The Latin American community is much slower in bringing charges against the priests. ...The priests themselves are held in greater esteem, and the culture is identified with the Catholic Church more closely." On a recent Sunday morning in Arecibo, churchgoers streamed through the heavy wooden doors of the city's 17th century cathedral. A swell of voices soon joined the priest inside in prayer, while 44-year-old Jose Soto hurriedly walked past the Mass in the town's deserted streets. "When you go in through those doors, it is supposed to be a spiritual, wholesome place," he said, adding that he once regularly attended Mass in the cathedral. "You don't know who you're listening to anymore ... It's like using the word of God for other purposes." The wave of allegations began in late January with a series of reports in local media, primarily in the newspaper El Nuevo Dia. In response, Arecibo Bishop Daniel Fernandez released a statement disclosing that since 2011 he had defrocked six priests accused of sex abuse, an unusually large number for a diocese with about 90 priests. Church officials said they have also provided counseling for at least one alleged victim and reparations in an unspecified number of cases across the island. Last week, one of Arecibo's defrocked priests, Edwin Antonio Mercado Viera, was charged with committing lewd acts. The 53-year-old, who had been a popular figure in the parish, is accused of fondling the genitals of a 13-year-old altar boy in 2007. Prosecutor Jose Capo Rivera said the bishop himself is "part of the investigation" due to accusations he committed lewd acts involving a minor. Fernandez has said he is innocent. "Clearly, it's revenge for the decisions I've taken since the moment I assumed leadership of the diocese, where the situation that I found was not the most positive," he said in a written statement. Agnes Poventud, an attorney for a man who says Fernandez molested him when he was child, told The Associated Press that federal agents recently interviewed her and her client. She declined to say when the alleged abuse occurred or how old her client was at the time, only to say he was a minor. A federal official confirmed to the AP that U.S. authorities have requested information about alleged clergy abuse from the Puerto Rico Justice Department. The official agreed to discuss the case only if not quoted by name because the information was not yet public. Further revelations have followed the Arecibo cases. The Diocese of Mayaguez, on Puerto Rico's west coast, said it has handled four cases of alleged sex abuse, the majority of them being reviewed by the Vatican's Congregation for the Doctrine of the Faith, which takes on such accusations. In addition, San Juan Archbishop Roberto Gonzalez Nieves said prosecutors are investigating six alleged sex abuse cases in the diocese of Puerto Rico's capital. He said the accused priests have been suspended and the statute of limitation has expired in five cases. Prosecutors also are investigating a sex abuse allegation in the Diocese of Caguas, Capo said. Meanwhile, justice officials accuse the Arecibo diocese of withholding information and are fighting a lawsuit still pending in court that the diocese filed to keep secret the names of alleged victims to protect their confidentiality. Prosecutors assert the move is intended to protect the accused priests, a charge diocese attorney Frank Torres denies. "The church has cooperated and has a policy of transparency, but that cooperation does not mean the church is free to violate the guarantees of confidentiality it has awarded the victims," Torres said in a phone interview. Diocese officials in Puerto Rico say that the statute of limitations has expired in many cases, an argument that Florida-based lawyer Joseph Saunders said has been the church's first line of defense. He said many church officials argue they should have been sued when the alleged violations occurred. "Nobody sued a bishop or a priest back then," he said. "There's an underlying fear of going to hell for suing the bishop." Read more here: http://www.kansascity.com/2014/03/11/4882986/abuse-charges-roil-heavily-catholic.html#storylink=cpy
Posted by Mike at 8:44 PM