Kensington landmark will be a monastery once more 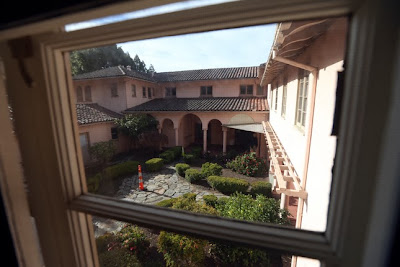 A landmark structure nestled in the hills that went on the market in October has been sold for the same use it had before -- a monastery for a group of Carmelite nuns. Repeating the process of how a Carmelite monastery became established in the building in 1949, a private donor has purchased the building to house a group of 12 Carmelites who are now residing on a ranch in Canyon, a tiny unincorporated community in the hills behind Oakland. The incoming group of nuns are young, replacing a contingent of four older nuns, down from 12 at their peak. Two of the older nuns moved to care facilities, and the other two relocated to a Carmelite monastery in San Francisco. "(The new nuns) are about the same age and the same number as the nuns who came in 1949," said Michael Korman of Korman & Ng Real Estate Services in Berkeley, the agent for the seller. "Twelve is peak of population at its previous high." The 60-room Spanish revival mansion, built in 1925, was listed for $1.95 million and sold for $1.9 million, Korman said. .......... The home, at 68 Rincon Road, is adjacent to the landmark Blake House, the now-empty former home of the president of the University of California, and Blake Garden, both owned and maintained by UC Berkeley. The rooms in which the nuns reside are small. Larger rooms in the house include a former ballroom, a dining room and a kitchen with butler's pantry. Windows on the western side of the house have panoramic views of San Francisco Bay and the Golden Gate Bridge. Buyer's agent Geri Murphy said she is seeking additional donors to pay for the $400,000 to repair water leakage from the roof and fix the electrical and plumbing systems, floors and foundation. "We will be doing some repairs to meet the needs of the community, what they want," said Murphy of Murphy & Associates Realty Group in Lafayette. "We plan to be done in about four months or less, and the nuns can move in." An outside sale was required to transfer use of the property from one group of Carmelite nuns to another because each carmel, or sect, is a separate corporation, Murphy said. The buyer, who wishes to remain anonymous, purchased the home from the Discalced Carmelite Nuns of Berkeley and donated it to the Catholic Diocese of Oakland, which will be in charge of maintaining it in perpetuity, Murphy said. "They are two separate entities, very independent," she said.
Posted by Mike at 9:44 AM