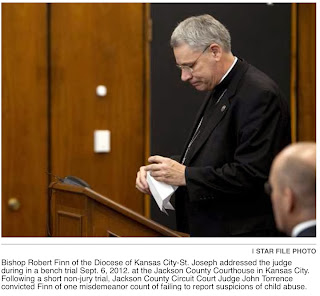 A group of Roman Catholics based in Kansas City has taken the rare step of petitioning Pope Francis to discipline Bishop Robert Finn of the Diocese of Kansas City-St. Joseph. The formal request, initiated by a Milwaukee priest, a nun, and about a dozen parishioners in the Kansas City area, was sent to the Vatican along with an online petition signed by more 113,000 people worldwide asking for the bishop’s removal. Finn was convicted in 2012 on a misdemeanor charge of failing to report a priest involved in child pornography. Finn was placed on two years of court-supervised probation. “The priest's crime that Bishop Finn concealed from civil authorities was of great magnitude,” said the Rev. James Connell, a priest and canon lawyer from the Archdiocese of Milwaukee, in a letter to the pope. “Thus, the harm done by Bishop Finn also was of great magnitude. Yet Catholic Church authorities have taken no action against Bishop Finn that would provide justice and repair scandal, and this lack of action adds to the ongoing scandal of the clergy sexual abuse crisis.” A spokesman for Finn’s office said the diocese had received a copy of the materials, which had been sent to the Vatican’s representative in Washington, D.C., for forwarding to the pope. “Bishop Finn has his supporters and his detractors, and people are free to have their own opinion about what happens here,” said the diocese’s communication director, Jack Smith. “The Diocese and Bishop Finn remain focused and committed to the strengthened reporting and training programs which are creating safer environments in our schools and parishes.” But Liz Donnelly of Kansas City, one of the parishioners signing the documents, said she feels forced by the case to stop giving money to the church. “I feel very sad about not contributing money to my parish because I love the staff and know their salaries and benefits are paid by our tithing, as are many good programs, but I could not in good conscience give money that would partially go to the Bishop who appears so removed from the people,” she wrote. The petitioners believe the U.S. justice system did its job but the church has not. The petition was initiated by Connell, who is part of a group of priests and nuns called the Catholic Whistleblowers. Sister Jeanne Christensen, formerly the Kansas City-St. Joseph Diocese’s victims assistance coordinator, was the nun who signed the letters. Connell said canon law requires a “just penalty” for a person who through “culpable negligence” harms someone by committing or omitting his “ecclesiastical power.” “This is quite unusual,” David Clohessy, national director of SNAP, the Survivor Network of those Abused by Priests, said of the petition.“The sad truth is that very rarely are Catholic bishops disciplined, and even more rarely do Catholic lay people initiate such requests.” A United Nations panel this month scolded the Vatican for not holding bishops accountable when suspected of failing to report abuse. Church officials said the Vatican was discussing the issue and that the pope has formed a commission of child sexual abuse. The petitioners’ request is tied to a case involving the Rev. Shawn Ratigan, who was found to have hundreds of pornographic pictures of young girls on his laptop. Ratigan was sentenced last year to 50 years in prison.
Posted by Mike at 3:09 PM