A Church so poor it has to close schools, yet so rich it can build a palace 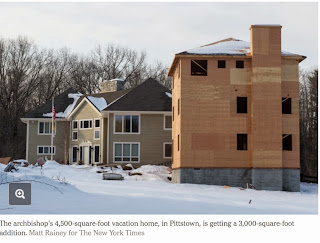 KEARNY, N.J. — Mater Dei Academy sits shuttered, blue drapes pulled across its windows, atop a hill in this working-class city. From its steps, you can peer across the mist-shrouded expanse of the Meadowlands to the distant spires of Manhattan. For generations, this blond brick Catholic elementary school tossed a lifeline to the immigrants who, wave upon wave, washed ashore here. The Archdiocese of Newark closed it two years ago. Church officials offered deep regrets; the church’s wallet is thin to the touch these days. “It was a loved place, that school,” said Dorothy Gawronski, a crossing guard holding a red “Stop” sign. “But the church, I don’t think it’s rich anymore.” All of which brings me along a winding and narrow road that switches back and forth across the wooded Capoolong Creek to a splendid 8.5-acre spread in the hamlet of Pittstown. This is rural and rather affluent Hunterdon County, 49 miles from Mater Dei. John J. Myers, the archbishop of the Newark Archdiocese, comes to this vacation home on many weekends. The 4,500-square-foot home has a handsome amoeba-shaped swimming pool out back. And as he’s 72, and retirement beckons in two years, he has renovations in mind. A small army of workers are framing a 3,000-square-foot addition. The archbishop's 4,500-square-foot vacation home, in Pittstown, is getting a 3,000-square-foot addition. This new wing will have an indoor exercise pool, three fireplaces and an elevator. The Star-Ledger of Newark has noted that the half-million-dollar tab for this wing does not include architects’ fees or furnishings. There’s no need to fear for the archbishop’s bank account. The Newark Archdiocese is picking up the bill. Jim Goodness, the spokesman for the archdiocese, has the thankless job of explaining this. “The press says it’s a hot tub; it’s a whirlpool,” he says of one of the wing’s accouterments. “He’s getting older — there are therapeutic issues.” The proceeds from the sale of other properties owned by the archdiocese, he explained, will pay for the expansion. “It is not going to cost our parishioners anything,” he said. I felt compelled to ask: Couldn’t this half million dollars go to, oh, more meals for the homeless? “Any extra monies will go to the diocese,” he replied. So many leaders of the church have served it so badly for so many decades that it’s hard to keep track of their maledictions. Archbishop Myers provides one-stop shopping. He is known to insist on being addressed as “Your Grace.” And his self-regard is matched by his refusal to apologize for more or less anything. It was revealed last year that a priest seemed to have broken his legally binding agreement with Bergen County prosecutors to never again work unsupervised with children or to minister to them so long as he remained a priest. When next found, he was involved with a youth ministry in the Newark Archdiocese. Parishioners in Oradell, N.J., also discovered that the archdiocese had allowed a priest accused of sexual abuse to live in their parish’s rectory. A furor arose, and last summer the archbishop sat down and wrote an open letter to his flock. He conceded not a stumble. Those who claim, he wrote, that he and the church had not protected children were “simply evil, wrong, immoral and seemingly focused on their own self-aggrandizement.” As to his critics, the archbishop accused the media of refusing to explore the “lifestyles” of the former or marginalized priests who criticize the church. “Lifestyle” is an intriguing kidney punch of a euphemism; presumably the archbishop meant “gay.” Pope Francis offers the intriguing counterpoint here. He shed the papal palace for a modest guest apartment, and the papal Mercedes for a Ford. He speaks of a “poor church for the poor.” “If a thought, if a desire takes you along the road of humility and abasement, of service to others, it is from Jesus,” he said last week. Left unsaid is where the thought process leading to that palace in Hunterdon County came from. Some months back, I attended a Mass celebrated for the Rev. John Grange. He was a plain-spoken worker priest, a man who walked with striking workers, picketed a slumlord and faced down a Bronx political boss. When he died in October, he was laid out in a simple coffin in his beloved St. Jerome Church in the South Bronx, and every pew overflowed with Latino working men and women, their children and crying babies. I watched those parishioners weep. And when the time came, I watched them pull out folded dollars and fill the offering plates. That was grace.
Posted by Mike at 8:55 AM