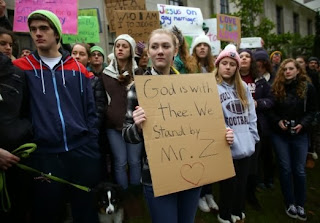 Ousted Eastside Catholic vice principal Mark Zmuda still wants his job back, but a boisterous Seattle forum Friday night delivered an additional message: Whatever happens, the school is not going back. Some 250 supporters of “Mr. Z” were welcomed to the parish hall St. Joseph Church to discuss the Catholic Church’s attitude toward gays and why it must change. An emotional Zmuda came onstage to announce formation of a “Stand with Mr. Z Foundation.” Zmuda lost his job on Dec. 20 after the school learned he had married his gay partner last summer. “I was definitely terminated; I did not resign,” he said last night. The ouster set off a spontaneous protest by students, parents and alumni that has made front page news coast to coast . . . and carried up to the liturgical end of the Church’s Christmas season, which is Feb. 2. “I was getting a good education, the students were friendly, the teachers were nice, the campus was beautiful — and then this happened,” said Bradley Jester, an Eastside Catholic student who withdrew in protest two weeks ago and now attends Mount Si High School in North Bend. Cleve Jones, a vintage San Francisco gay-rights and union organizer — he was an aide to assassinated supervisor Harvey Milk and was played by actor Emile Hirsch in the movie “Milk” — told the audience how he felt watching Mr. Z protests from afar. “I am really moved by this,” said Jones. “I get a feeling that what is happening here is not one of those brief and transitory moments.” The students are getting inspiration from above. They are selling T-shirts featuring the image of Pope Francis, and his now-famous question about gays and lesbians: “Who am I to judge?” Pope Francis is the first Jesuit pope, and St. Joseph is a Jesuit parish. Its pastor, Fr. John Whitney, S.J., welcomed the gathering and sang praises of the Eastside students — even though they have protested church teachings, school policies and the Archdiocese of Seattle. “The real humility spoken of by Pope Francis is that we don’t have the answers,” said Whitney. “We need to have the conversations . . . Why, what does it (church teachings on sexuality) mean in human terms.” Seattle Archbishop J. Peter Sartain campaigned against Referendum 74, which legalized same-sex marriage in Washington. The archbishop has forbidden any use of church or Catholic school facilities for such marriages or receptions. Catholic clergy cannot give marriage-preparation counseling to gay or lesbian couples. Across the country, employees of Catholic schools and organizations who have legally married same-sex partners have started to lose their jobs. In Western Washington, the firing of “Mr. Z” has generated a protest that has spread from the Eastside Catholic campus in Sammamish to other Catholic high schools in the area. “I am a queer Catholic youth,” Zeena Rivera, a student at Holy Names Academy, announced on stage at the forum. She explained that the two things in life in which she takes greatest pride are “the love and community” of her Catholic parish (St. Joseph) and Holy Names, and her work with Seattle’s LGBT activists. “Both of these communities are home,” she said. Mary deRosas, a St. Joseph parishoner and Jesuit lay volunteer, disputed the Catholic hierarchy’s opposition to gay unions with these words: “The Church may say one thing about sexual orientation, but I hear God saying another.” Such words have shocked some traditionalist Catholics, who see living their faith in terms of doctrine and obedience, even if teachings not fully comprehended must be taken on faith. But deRosas argued, in human terms, the need to open up and respect people who love each other. “When we encounter somebody we (initially) fear and then turns out to be a normal person, that is when the conversion experience occurs,” she said. Catholics seem to be gravitating toward that viewpoint. Despite opposition from the Catholic hierarchy, national polls show lay Catholics support same-sex marriage in percentages slightly higher than the population as a whole. Such Catholic politicians as New York Gov. Andrew Cuomo, Maryland Gov. Martin O’Malley, California Gov. Jerry Brown, House Democratic leader Nancy Pelosi — and Washington’s former Gov. Christine Gregoire — have championed gay marriage in their states. Zmuda, his voice breaking, called Catholic high school students to the stage Friday night. The first up were members of the Eastside Catholic swim team that he coached, wearing “Swim for Coach Z” T-shirts. The students at Eastside became the teachers, he argued. “They are trying to teach the Church and the school some valuable lessons,” Zmuda said. They are trying to live a message broadcast every day at the school after announcements: “Take care of each other.” “It is because of you and your bravery that we are here tonight,” Zmuda added. Zmuda is a Catholic. He was raised a Catholic. He believes in God and the Holy Trinity and, he says, tries to obey the Ten Commandments “to the best of my ability.” And he is a gay man who exercised his right to enter into a civil marriage with his partner. Will the Catholic Church and society fully embrace him? Cleve Jones, raised a Quaker and now approaching his 60th birthday, tried to address the question from the civil side. “I think I am going to see all my people gain full protection under the law in all 50 states, I will see that in my time,” said Jones.
Posted by Mike at 3:15 PM