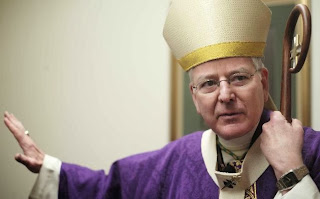 Archbishop John Nienstedt and former vicar general Kevin McDonough must testify under oath about how the Archdiocese of St. Paul and Minneapolis responded to allegations of child sex abuse by local priests, a Ramsey County district judge ruled Tuesday. Judge John Van de North also ordered the archdiocese to create a list of all priests accused of sexually abusing minors since 2004. The list, which must be prepared by Feb. 18, is in addition to a list of clergy accused before 2004, which was released in December and would include all priests who had been the subject of abuse complaints, not just those church officials had determined were “credibly accused.” He also said attorneys could begin reviewing internal church documents that shed light on how it handled clergy abuse complaints. The case that led to the historic rulings was filed in 2013 on behalf of a man who claimed he had been abused decades earlier by the Rev. Thomas Adamson, who later left the priesthood. It contends that church officials here and in Winona put children and others at risk of abuse by failing to disclose information about priests who had been accused of abuse. “This is a very important case … This has become a bellwether case,” said Van de North, referring to the demands that the archdiocese provide information. A ‘giant move forward’ St. Paul attorney Jeff Anderson, lawyer for the alleged victim identified only as John Doe 1, called it a “giant move forward.” He said it is the first time an archbishop in Minnesota has been required to submit to a deposition that was not limited to just one alleged abuser. It’s also the first time that a court has allowed such a range of internal church documents to be made available, he said. “Today a door has been opened, light can shine in,” Anderson said. Former Twin Cities Archbishops John Roach and Harry Flynn had been questioned under oath in other lawsuits, said Mike Finnegan, an attorney with Anderson’s law firm. “But this is the first time the scope of the questions will not be limited to one individual perpetrator,” he said. “We’ll be able to ask about all the perpetrators that have worked in the archdiocese and the archbishop’s and Kevin McDonough’s role in covering up the abuse.” According to the court order, the depositions must be taken within 30 days. Because of the volume of documents at issue as the case moves forward, Van de North also said he would seek a “special master” attorney to work with him on the case. The archdiocese issued a written statement Tuesday after Van de North ruled. “The archdiocese looks forward to working with the Court and all affected parties to promote the protection of children, the healing of victims and the restoration of trust of the faithful and our clergy who are serving our communities nobly and with honor,” the statement said. The John Doe 1 lawsuit alleges that Adamson abused the boy from 1976 to 1977. The suit against the archdiocese and the Winona Diocese was the first filed since Minnesota temporarily lifted the statute of limitations on older abuse cases. Archdiocesan attorney Daniel Haws argued that the scope of investigation — from decades-old church records to depositions of church leaders — was not relevant to the case of John Doe 1, whose reported abuse occurred more than 30 years ago. Nienstedt has been archbishop since 2008, he said, and McDonough was new to his job as point person in the chancery on clergy misconduct complaints, Haws told the court. Judges typically limit the discovery of evidence on cases to the period during which the alleged problems occurred, he said. But Anderson argued that the lawsuit sought to prove the church had created a public nuisance, and to do that, it would need to show a pattern of abuse. Limits imposed on testimony Van de North, however, did limit the scope of the sworn testimony. He said Nienstedt could testify under oath for a half day and McDonough for a full day. The judge also narrowed the scope of discovery for the “negligent supervision’’ charges in the case to the period of 1970 to 1985. Van de North also ruled that Anderson could take testimony under oath from the Rev. John Brown, now retired in Maplewood, whom Anderson alleged had abused children in the 1950s and 1960s. How the archdiocese handled his case could shed light on its handling of Adamson’s and others, Anderson claimed. The archdiocese opposed releasing the names of priests who had been accused of abusing children since 2004. That list would be different from the names released in December, because the priests on the earlier list had been determined by the archdiocese to be “credibly accused.” The new list would contain the names of all priests who had been the subject of child abuse complaints to church officials. The archdiocese argued that priests who had been falsely accused of abuse could have their reputations tarnished. In response, Van de North said the new archdiocese list could be filed “under seal, accompanied by a through explanation of why public disclosure is unreasonable.” The names could be disclosed by later court action. The archdiocese said Tuesday that protecting those falsely accused remained critical. “We strongly assert our pursuit of justice for any who are falsely accused,” the archdiocese wrote in its statement. “All of these goals are the basis for every action and decision we are making regarding this ongoing disclosure.”
Posted by Mike at 10:48 AM