Challenge to bishop's authority viewed as a key to controversy 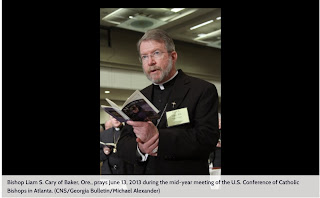 Baker, Ore. Bishop Liam Cary's emphasis on the vow of obedience in his May 7, 2013 open letter to St. Francis of Assisi Parish in Bend, Ore. is viewed by many as a key to Fr. James Radloff's removal as pastor. Petitions were circulated asking the bishop to back down on plans to transfer popular Spanish-speaking priest Fr. Juan Carlos Chiarinoti, a native Argentinian. In the letter, Cary admonished parishioners and Radloff for the petition effort. He called it “out of place” and said it “thrust into public view matters that must be dealt with in private and whetted the appetite for an explanation that could not be forthcoming." Cary also directly rebuked Radloff: "In launching this movement to pressure me to do what he wanted, your pastor made a very serious error of judgment. He actively recruited you to stand with him against your bishop. ... On the day of his ordination, a priest places his hands between those of the bishop and publicly promises 'respect and obedience' to him and his successors. ... To build up the unity of the Church, priests must be willing to walk the way of obedience; and a bishop must be able to count on his priests to be true to their promise." In a 2007 interview then-Fr. Cary expanded on how critical it had been for him as a diocesan priest to be obedient to his ordinary. One priest who has known the bishop “for many years” and worked with him, said Cary and Radloff's understandings of obedience and priestly ministry “are about 179 degrees apart.” The priest — who asked not to be named — feels Cary views a diocesan cleric's core work should be carrying out the bishop's vision of ministry and parish, and that a priest is first accountable to his ordinary. Radloff operates from a mandate of “serving the people of God to the best of his ability” and that is his “first line of allegiance.” Fr. Leo Weckerle strikes a middle ground. “I know Fr. Radloff extremely well,” he said Feb. 21. “He is an extremely hard-working priest, a great priest, although he can be somewhat precocious at times and can think with his mouth, and that can get him into trouble.” “It would be a great shame if his talent were to be wasted,” said the retired priest who resides in the small community of Terrebonne, Ore. and who has had his own run-ins with bishops in the past. “The bishop really is the pastor of all the people in the diocese,” added Weckerle, a former chancellor and judicial vicar of the diocese. “It is up to the priest using his knowledge gained in the seminary and in private study to put all his talents toward … carrying out the vision of the bishop. A priest cannot do his own thing outside the bishop's vision for the diocese. It is up to each one of us priests to adapt ourselves to the bishop. ….” The bishop has spoken In letters to the editor of Bend's major newspaper, The Bulletin, and in reader posts following NCR reports, some accuse Radloff of episcopal disobedience. Summarizing some of these views, one parishioner told NCR: “So many Catholics here do not understand that the church is not a democracy and they certainly don't understand that we accept whatever comes our way cheerfully and with humble obedience. My comment will fall on deaf ears of those who want their way no matter what. … I would hope that they will receive the grace to forgive and just let go. That is what I am praying for. Those who have already accepted what has happened want to move on and make our parish a positive, welcoming, loving, and helpful place.” Mentioned multiple times as “a major actor in the present drama,” in the words of one parishioner, John Henchman might echo those thoughts. A parish council member and “longtime pillar of the parish,” in the words of another parishioner, Henchman told NCR on Feb. 8 that he did not want to comment, but he did say, “The bishop had every right to make his decision,” and indicated it should be accepted and respected. Thirty-year parishioner Ken Roberts seems to agree: “We have no idea what prompted the decision but believe it had been brewing for quite some time and not done rashly. My take is that a lot of the people are still upset, not so much about Radloff’s removal but the manner in which it was done and the bishop’s seeming unwillingness for any kind of reconciliation or any public explanation of his decision.” Many do not accept at face value Cary's insistence that he refuses to divulge the reasons for Radloff's removal to protect “the right to privacy of all involved parties,” as he wrote in his letter to parishioners attending Feb. 15-16 Masses. Some say the language rings reminiscent of statements used by church officials to cover up clergy sexual abuse. Said one parishioner, “I understand the bishop is the bishop and all that, but my generation is not going to just follow blindly.”
Posted by Mike at 11:40 AM