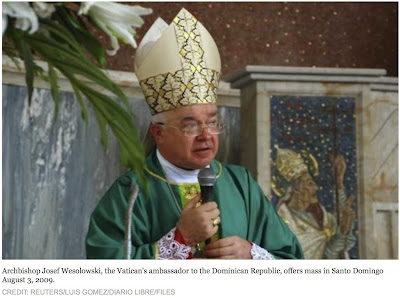 (Reuters) - The Roman Catholic Church ordered a Polish archbishop accused of sexual abuse in the Dominican Republic to be defrocked, pending further criminal proceedings, the Vatican said on Friday. The Vatican's Congregation for the Doctrine of the Faith ordered Jozef Wesolowski, a former Vatican nuncio or ambassador to the Caribbean nation, to be stripped of the priesthood, an extremely rare step against such a senior Church official. He will have two months to appeal the ruling, delivered after a canonical trial - under Church law - in the Vatican, which has been under pressure for more than a decade to clean up the scandal of sexual abuse of children by priests. A statement from the Holy See said criminal proceedings by Vatican judicial authorities would begin once the sentence was confirmed. If found guilty in a criminal trial, Wesolowski could risk extradition to the Dominican Republic. Last month, Pope Francis pledged "zero tolerance" for anyone in the Church who abused children and likened sexual abuse to a "satanic mass". Wesolowski was recalled last August to the Vatican, which said a month later that it would cooperate with Dominican authorities investigating him on suspicion of paedophilia. The Vatican said his movements had not been restricted while the case was being considered but that following the decision to expel him from the priesthood "all measures appropriate to the seriousness of the case will be adopted". As an independent city state, the Vatican can detain or limit the movements of those subject to its jurisdiction. Last month, the United Nations watchdog body against torture called on the Vatican to investigate the Wesolowski case and ascertain whether it warranted criminal prosecution or extradition to face charges in the Dominican Republic.
Posted by Mike at 7:03 AM