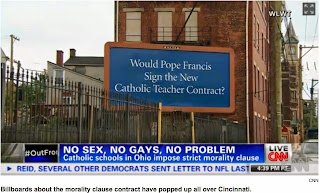 In-vitro fertilization, surrogacy, out-of-wedlock sex, a gay “lifestyle”—these are just some of the ‘sins’ that Cincinnati’s Archdiocese expects its teachers to stay away from. And if they don’t sign a recently updated morality contract by the end of the school year, the Archdiocese’s 2,200 current teachers risk losing their jobs. "It is an embarrassment and a scandal, and will drive even more Catholics away from an institution so out of touch with its times," said Robert Hague, a teacher who is leaving his job at a Catholic school because of the contract, told CNN. The revised morality contract is twice the size of last year’s contract, The Cincinnati Enquirer reports. All teachers in the system are bound to sign the clause, whether they are Catholic or not. The clause spells out in detail church doctrine about, among other things, cohabitation, homosexuality, abortion, and fertility methods. Teachers are prohibited from publicly contradicting church teachings, as well. And for the first time, the contract explicitly calls all teachers “ministers”—even gym teachers. In the past, Supreme Court justices have given “ministers” a special exception. The exception ensures that the government doesn’t become entangled with a church’s hiring and firing practices and, as a result, hinder the free exercise of religion. The Archdiocese’s superintendent, Jim Rigg, has emphasized that the new contract is not any different from the contract that teachers have been signing at its schools for decades. Molly Shumate, a first-grade teacher, has decided to leave her school instead of signing the contract. "We cannot, nor should we, peek through the windows of our employee's homes to see whether they are living a moral lifestyle," Rigg wrote in an op-ed for the Cincinnati Enquirer. "The contract is not an excuse for some type of witch hunt, but merely a clearer verbalization of what it means to be a Catholic schoolteacher." But critics say the Church is just trying to cover its tracks and protect itself against pricey lawsuits. Last year, an unmarried computer teacher used in-vitro fertilization to become pregnant and was subsequently fired from her job. In the ensuing lawsuit, a jury awarded her more than $170,000. Shumate, a first-grade teacher, says her son Zachary is gay. ‘In my eyes there is nothing wrong with my son. This is what God gave me and what God created and someone I should never be asked to not support,’ she said. Another teacher was fired after showing support for gay marriages on his blog. After hearing about the updated contract, Molly Shumate, a first-grade teacher, has decided to leave her school voluntarily. Her son is gay and she is worried she may not be allowed to support him. "In my heart, I know I need to go. I need to find another avenue because I am going to support my son," Shumate told CNN. "If in five or 10 years he finds a partner and he wants to be with that person, I'm going to be in the front row with the biggest bouquet." Billboards about the morality clause contract have popped up all over Cincinnati. But the Archdiocese’ superintendent said that the contract does not ask employees to sever ties with loved ones who may be LGBT. "As Christians, we are called to love and serve all people … while the Church's stance on homosexual marriage is well known, this does not mean that our teachers will be asked to cast away loved family members," said Rigg. In fact, Shumate admitted that she’s been told by higher ups that she wouldn’t be fired for publicly supporting homosexuality—only reprimanded. "However, I don't think I should be reprimanded, either," Shumate responded. In response to the contract, teachers from two schools in the Cincinnati area are organizing a union that will fight for collective bargaining rights. In the meantime, Shumate is looking to Pope Francis for guidance. When asked about gay Catholic priests during an interview last year, the Pope famously said “Who am I to judge?” "What's happening here is you are taking confessional matters and trying to make them public matters that people have to sign a document about," Father Edward L. Beck, an author and religious commentator, said. "And I think Pope Francis is really on another track here."
Posted by Mike at 7:16 AM