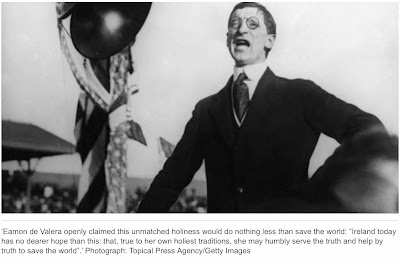 Meet an egomaniac and you know you are also meeting a deeply insecure person. People who are uncertain about themselves sometimes deal with their anxiety by creating an exaggerated image of superiority. And it is the same with countries – our own for example. There is a certain irony to Ireland’s badness – it arises in part from delusions of grandeur. This place became so vicious partly because of a hysterical insistence on its unique virtue – a habit of mind that has never gone away. It’s easy to understand why Catholic Ireland became so hyper-virtuous. A long history of denigration, humiliation and subjection creates a profound distortion. It is not enough to be as good as anybody else – you have to be better, indeed the best: uniquely wonderful. But this fantasy is not harmless. At best, it feeds a deluded detachment from reality. At worst, you have to hide, exclude, deny, those who threaten to spoil the picture of perfection. Unlike the extreme versions of such dark utopias in Nazi Germany or Stalin’s Soviet Union, independent Ireland did not actually exterminate the spoilers of its unique purity. But it did get rid of them – mostly through emigration but also, notoriously, in its vast system of “coercive confinement”: industrial schools, Magdalene laundries, mother and baby homes and mental hospitals. ‘Impure’ women Thus, the appalling treatment of “impure” women in these institutions was a direct consequence of the insistence that Irish femininity was uniquely pure. This was a key point of national difference: England seethed with sex and sin, Ireland was a paradise of continence and virginity. This unique virtue in turn compensated for the real economic failures of the new State – what did it matter that we were poor, backward and exporting half our population? Our values were not material but spiritual. And, as Eamon de Valera openly claimed, this unmatched holiness would do nothing less than save the world: “Ireland today has no dearer hope than this: that, true to her own holiest traditions, she may humbly serve the truth and help by truth to save the world.” This fantasy may have been risible, but for those who had to be locked away to keep it alive it was no laughing matter. Naive past But let’s not continue the delusion by patronisingly sneering at the naive past. The insecure nation’s need to construct an exaggerated notion of its own specialness is just as evident in the last two decades as it was in the 1930s or 1940s. It’s there, of course, in the continuing insistence that we’re the holiest country in the world because we don’t allow abortion for women who have been raped. But it was also a large part of the psychosis of the Celtic Tiger years. It wasn’t enough for us that we might end decades of economic and social underperformance and achieve a modest and sustainable prosperity. We had to be the world champions of loadsamoney swaggering. We were “the richest non-oil country in the world” (Irish Independent, January 2007) – a ludicrous claim based on a confusion of multinational profits with domestic earnings and of national income with national wealth, but one that was widely believed and acted on. We were the geniuses who had cracked the code of 21st century development and, for an immodest fee, we could lecture the world on “the Irish model”. We swapped unique sanctity and purity for unique capacity to make money, but the mentality was exactly the same. And it goes on. When everything fell apart, we had to be uniquely self-sacrificing in our efforts to save the euro – the best little Europeans on the planet. And now – in case you haven’t noticed – we’re just two years away from a triple crown of world- beating achievements. Here, God help us, is the Taoiseach in March 2012, repeated in July 2013: “By 2016 we will prove to be the best small country in the world to do business, the best country in which to raise a family, and the best country in which to grow old with dignity and respect . . . This will be the Republic of 2016.” Before we laugh at Dev, we might read that again and remember that a third of children are now living in deprivation and that “dignity and respect” for the elderly means getting a chair to sit on for 24 hours in an A&E department and having carers’ allowances, respite grants and home adaptation grants decimated. But no matter – in 18 months we’ll be a unique paradise for the young and the old. (This year’s budget is going to be spectacular.) Lies If we’re to grow up, we need to cure our delusions of grandeur that produce lies and exclusion. Instead of being absolutely wonderful and special and a beacon of civilisation for the poor benighted world, could we not aim to be normal? Could we not imagine a decent, caring society with a sustainably prosperous economy and a modest sense of wellbeing? Could we stop being simply the best and try to be simply good enough to make the place habitable? Otherwise, the only thing we’ll remain best at is hypocrisy.
Posted by Mike at 8:45 PM