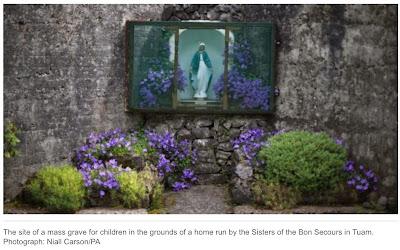 It is hard not to be horrified, sickened and shocked at the heartbreaking revelations that 796 babies died and may have been buried in a mass grave in the grounds of a home run by the Sisters of the Bon Secours in Tuam, Co Galway, between 1925 and 1961. As a mother, I am mourning to my core the loss of these precious lives. It is nearly beyond my capacity to understand how helpless, tiny human beings could have been apparently discarded and treated in this way. The full facts surrounding the deaths will probably never be established. But the question on all our minds is what happened these babies? Did they die when the mother was in childbirth? Did they die from malnutrition and neglect? Did they die from an illness that is now easily treatable? Did they die alone? These infants died in a mother and baby home at a disgraceful period in Ireland when unmarried mothers were banished and hidden away and cruelly forced to give up their infants for adoption on birth. As founding chief executive of the government-funded Crisis Pregnancy Agency, I understand the trauma of a crisis pregnancy and our shameful history in failing to support Irish girls and women who were pregnant and unmarried. ‘Darker past’ As the chief executive of the Irish Hospice Foundation, and more importantly as a citizen of this State, I am deeply shamed that babies appear to have been treated inhumanely and given a burial devoid of dignity. Commentators have referred in the last few days to this as part of our “darker past”. But what makes this most disturbing is that these events are still in living memory of almost half the population. Everyone – no matter what their age, background or religion – deserves to die with dignity. The Irish Hospice Foundation is working to ensure that all of us have the chance of a good death and are treated with respect not just at the end of life but after life also. It is devastating for parents and families when a baby dies. Of all deaths, those of children and babies are the most poignant and we must ensure that each fatality is treated with the utmost of respect and reverence. Thankfully, attitudes towards infants and infantile death in Ireland have changed greatly. And the despicable practices of Tuam no longer exist today. My daughter, Aisling, died in a Dublin hospital at just 10 weeks old. I will never forget the compassion and kindness shown to me and my husband by staff and how after death Aisling was treated by them with the utmost dignity. There are ways to honour a life and provide some small comfort to those in unbearable pain. The death of a loved one – whether a partner, child or parent – is one of the most challenging life events that any of us will have to deal with. The benchmark of any society is the way in which it takes care of its most vulnerable. The State failed the Tuam babies and thousands more too over the generations. Bereavement grant cutback In the last budget, the Government cut the bereavement grant. This raises serious ethical questions about the type of society it is creating and specifically how it treats its citizens at one of the most vulnerable period of their lives. The Government needs to do all it can now to make amends in the Tuam babies case. We cannot ignore the past, but we can reclaim it. The Tuam babies – and all other babies and children buried in unmarked graves – deserve a response at a political and human level. It is not too late. A proper historical inquiry must be held into the deaths of these 800 babies. Every effort must be made to redress the pain imposed by making proper burial arrangements for the children who died. And every effort also needs to be made to identify these children and, where possible, to inform relatives. There are brothers, sisters and possibly mothers and fathers who are still alive. It is not too late to grieve and honour the memory of these babies.
Posted by Mike at 7:19 PM