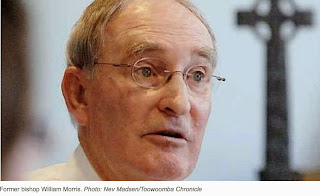 A sacked Catholic bishop will tell a Canberra audience this week he was treated unfairly by Pope Benedict. “I was deprived of natural justice as I was in no way able to appeal the judgments or decisions that were made,” Bill Morris says. He was forced out of his position in Toowoomba after a group of conservative “temple police” parishioners complained directly to the Vatican about his preaching which included discussion about ordaining women and married men. He has written a book about his experience – Benedict, Me and the Cardinals Three – but says he has no bitterness. Instead he has learnt to “breathe underwater”. “That’s the freedom to be able to move with life in such a way that you can absorb the various difficulties, the good things, the bad things and all the time with a great respect for everything around you,” he said. The book says he told Pope Benedict XVI in a personal meeting of a sex abuse case at a Toowoomba school but the Pope dismissed the bishop’s request to remain at his post to deal with it. The book notes that in 1998 Pope John Paul II effectively made it an offence for the faithful to discuss the possibility of the ordination of women. Bishop Morris also faced complaints from a small band of parishioners over debate about general absolution. Pat Power, the retired Auxiliary Bishop of Canberra, who will launch Bishop Morris’ book on Thursday, agrees his colleague was treated harshly. He believes such treatment would not have occurred under Pope Francis. “I think it was grossly unfair because the issues on which Bishop Morris was crucified were issues very much of legitimate theological debate and speculation,” Bishop Power said. “Some things said about him were quite patently wrong … that was quite unfair. “In the Toowoomba diocese there is a small group, a fairly vocal group, who are quite conservative both politically and in church terms. A lot of it was Pauline Hanson’s constituency. “They made complaints about him and it was generally agreed a lot of those were taken too seriously by the authorities at the time. “The vast majority of the priests did support him. I gave a retreat to the priests there in 2003 and they were really rejoicing in the fact; they said he was the best bishop in memory there.” Bishop Power has also been promoting the ordination of married men. “I have been in hot water over that and some people asked me how the axe fell on him but it didn’t fall on me,” he said. “I’ve had my critics of course but I’ve never had any concerted campaign against me in the way that he had, led by that small group of people up there.” Bishop Morris had raised issues including married clergy, female priests and the possibility of recognising Protestant orders, in an Advent pastoral letter in 2006 that discussed the declining number of priests in far-flung parishes like Toowoomba. In the book, Bishop Morris details the pressure on him from the Pope to resign as Bishop of the diocese of Toowoomba. “I was denied natural justice and my reputation as a bishop of the Catholic Church was called into question and yet I could do nothing,” he writes. “While now there is a new and different papacy under Pope Francis, the processes that culminated in my being asked to resign are still the same.” He reveals the tension of the face-to-face meeting he had with Pope Benedict in June 2009. “He said: ‘It is God’s will that you resign’,” Bishop Morris says. He writes that there was no understanding of the devastating effects of clerical sexual abuse. He says he tried to explain how the abuse led to some people mistrusting the church but senior Vatican officials like Cardinal Francis Arinze, the Prefect emeritus of the Congregation of Divine Worship and the Discipline of the Sacraments, “would have none of this”. “They had no idea how it would be almost impossible for a person who had been sexually abused in the confessional or in any other place to go back into a room, no matter how large, to have a one-to-one confession again,” he says. Asked if he believed he would have been treated differently by Pope Francis, Bishop Morris said: “I think I would've had a dialogue rather than a monologue. “One of the main things Pope Francis has spoken about ever since he came onto the scene is that if we are to grow together and to understand each other, then dialogue is the most important aspect of that relationship.” Bishop Morris said a group of conservative Catholics went to Rome ahead of a meeting of bishops. “The ones from the diocese write directly to Rome without you seeing it … so when we got to Rome we were basically ambushed,” he said. “One of the difficulties is that dialogue is difficult with them because they have one particular view and [as far as they are concerned] their view is the correct view. “Unfortunately they won't look at things other than the way they see them.” Bishop Morris said he had no regrets about the path he has taken and is still active in the Toowoomba and Brisbane dioceses. “I did not agree to resign, but negotiated with Pope Benedict to take early retirement which was announced in May 2011,” he said. “I don’t run a diocese any more but I can do everything else a bishop does – teach, preach, sanctify, pastoral work.” *The book launch is at 7.30pm on Thursday at the Australian Centre for Christianity and Culture at Barton.
Posted by Mike at 7:22 AM