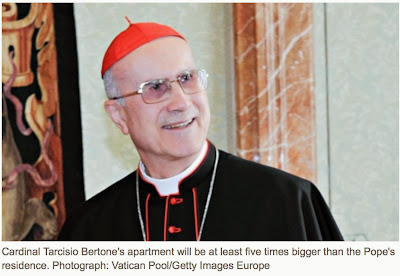 It sits atop the roof of an old palazzo in the centre of Rome, surrounded by a broad terrace that affords breathtaking views across the Eternal City to the mountains beyond. The penthouse apartment at the centre of Paolo Sorrentino's Oscar-winning movie La Grande Bellezza? Or perhaps the chosen retreat of a Forbes-list billionaire? No. The flat in question is being created in the Vatican for the man who until recently was its most senior official. While Pope Francis has been exhorting his clergy almost weekly to live lives as simple and frugal as his own, work has been going ahead on a luxurious retirement home for Cardinal Tarcisio Bertone, who stepped down as the Vatican's secretary of state last October. Reports of an extensive renovation project began to circulate in April. But it was not until last week that an Italian gossip magazine, Chi, published the first photograph of the work being carried out on top of the Palazzo San Carlo, just inside the walls of the city state. In a message to the newsletters of his former dioceses, Bertone acknowledged that his intended new residence was spacious. But he said that a previous estimate of 700 sq metres (7,500 sq ft) was double the true figure. The 79-year-old prelate wrote that it was normal for flats in the Vatican's old buildings to be large. He added that the one on the roof of the Palazzo San Carlo "duly converted (at my own expense) was made available for my temporary use and, after me, someone else will use it". Even at 350 sq metres, however, the cardinal's new residence would be five times bigger than that of the pope, who lives in a one-bedroomed suite in the nearby Casa Santa Marta. Bertone's successor as secretary of state, Cardinal Pietro Parolin, has similarly modest accommodation in the same building, which serves as a hotel for visitors to the Vatican. Until the arrival of Pope Francis, it was normal for the Catholic church's most senior officials to retire to extensive and well-appointed lodgings. But, according to several Italian media accounts, the new pontiff was furious when he discovered the purpose of the work being carried out just a few yards from his own simple quarters. The daily La Repubblica linked his reaction to a sermon he gave shortly before Easter in which he inveighed against "unctuous, sumptuous, presumptuous" clerics who ought instead to be spurning purely human and material pleasures. Bertone wrote that – on the contrary – he had received an "affectionate telephone call" from the pope just two days after the publication of the first report and that Francis had expressed "his solidarity and disappointment at the attacks directed at me over the apartment". Asked to comment on the affair, the pope's spokesman, Father Federico Lombardi, said: "I have nothing to say." Work being carried out on the building has involved putting scaffolding up four storeys and around the entire penthouse complex. La Repubblica said the refurbishment involved merging two existing flats: one of between 300 and 400 sq metres previously assigned to the head of the Vatican gendarmerie, and another of around 200 sq metres belonging to a deceased prelate. In addition, the cardinal would have the use of a terrace area covering a further 100 sq metres. La Repubblica said that Bertone would share the apartment with three nuns who would take care of the domestic work.
Posted by Mike at 4:56 PM