Public protest in Cork seeks justice for mothers and babies 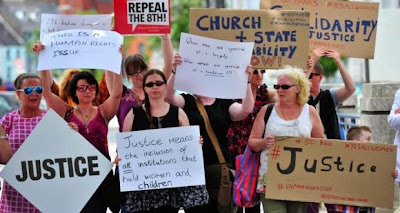 In the region of one hundred people attended a public protest at Cork City Hall this afternoon organised by groups who are looking for justice for mothers and babies abused at the hands of the Church and State. Among the speakers was Dave Dineen, who first encountered sexual abuse at the age of seven. Through a stormy childhood he found himself placed in the care of a religious institution in Cork. Mr Dineen, who is the chief executive and founder of the Lamh Healing Foundation, says his healing journey has been about learning to live with a difficult past. ‘All to do with an Ireland past, of course. We’re much more tolerant now. Enda pulled out all the stops in the Dáil. In fairness, he’s damn good at this. He oozes compassion and understanding.’‘This is about the kind of country Ireland was where women were the focus of shame’ “I stand as someone who has gone through the institutions. I also stand as someone who has been abused in a home as well. I am very conscious over the last few weeks of the traumatic episodes that have been happening in Ireland where families have been ripped apart by secrets that are deep deep inside. One of the priorities for me today is to say to people to take care of yourselves. These are very deep soulful stories. There is danger that we keep re traumatising ourselves with no support.” All of the major political parties were invited to yesterday’s protest, but just two politicians turned up, Sinn Fein TD Sandra McLellan and local Sinn Fein councillor Mick Nugent. Deputy McLellan said she had heard some horrendous stories from constituents in recent days. “I had women come in to my constituency office in the past and in the last week. Women that had been trying to find their children. Children that had been trying to find their parents. I was told of instances of abuse. I was told that children were taken away from parents and adopted illegally. I was also told from one lady last week that she was subjected to vaccine trials. She wanted to know what she was injected with.” Meanwhile, mothers and babies who were separated from each other in Bessborough’s Mother and Baby Home have sought assistance from an international adoption website in a bid to find each other. In the last two weeks a number of posts have been placed on www.adopteeconnect.com seeking information about infants who were put up for adoption. One mother, who is aiming to trace her daughter born in the Cork home in early 1968 wrote on June 9th that she thinks of her baby every day.
Posted by Mike at 3:46 PM