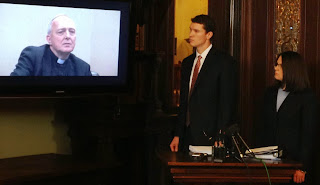 The Rev. Kevin McDonough, the Twin Cities archdiocese’s point person on clergy sex abuse, acknowledged that church practice for years was to allow priests who sexually abused children to remain in the priesthood, but to move them to jobs where they would be less likely to have contact with children. In a court-ordered deposition released Thursday, McDonough said priests suspected of abusing children were not automatically reported to police, as required by law. And the notes he took about their cases, and maintained in church files, were written with an eye toward possible future lawsuits against the archdiocese. “When I produced records, my tendency was to mentally invite [plaintiffs’ attorney] Jeff Anderson into the office, presuming that I would be held accountable in the years ahead for my activity,” McDonough testified. “So my general stance was to — to think in terms of what I was producing as one day being publicly available.” The comments were made as part of nearly seven hours of testimony released by Anderson’s office and the Twin Cities archdiocese Thursday. The notes mentioned are among more than 40,000 pages of documents that the archdiocese also has been court-ordered to provide to attorneys for an alleged victim referred to as John Doe 1. The man filed a lawsuit against the archdiocese last May, charging he was sexually abused by a priest in St. Paul Park in the 1970s. The deposition dealt less with details about priests’ abuse of children than with the archdiocese’s response to complaints of abuse by parents and children. It comes two days after a deposition of Archbishop John Nienstedt was made public. In his testimony, Nienstedt stated that McDonough had advised him not to record or keep records of certain conversations about child abusers. McDonough, however, said that was not the case. “First of all, he [Nienstedt] and I would never have been in a position for much casual conversation,” said McDonough. “Archbishop Nienstedt managed largely by memo … But I don’t recall the question ever being asked about recording conversations with — between the archbishop and myself.” Contentious exchange A contentious back-and-forth emerged during the testimony, which “showed a consistent pattern of deny, minimize and blame,” charged attorney Mike Finnegan, of Anderson & Associates. The testimony was critical, he said, because McDonough was “far and away the most knowledgeable person about child sex abuse in the archdiocese.” McDonough was vicar general from 1991 to 2008 under Archbishops John Roach and Harry Flynn. Under Nienstedt, he became the “delegate for safe environment,” overseeing child abuse prevention efforts until stepping down last year, shortly before media reports that he was a key decisionmaker in several abusive priest cases. McDonough said the archdiocese did not try to hide information about abusive priests from the police or parishioners. He said that a child’s safety is important. “Any time a kid is hurt, my heart’s broken,” he said. During the deposition, McDonough explained the archdiocese’s policy toward child sex offenders. “In the period from 1988 until 2002, men who had committed crimes against young people were still retained in what we understood to be administrative capacities in the archdiocese,” he testified, “ … and were still allowed to practice as priests, for example, saying Mass to convents of sisters. And after 2002 … that was no longer permitted.” In 2002, national bishops created a Charter for the Protection of Children, which called for zero tolerance of abuse and for reporting the abuse to authorities. But when pressed about his response to requests late last year by St. Paul police to discuss a recent child abuse case, McDonough said he did not make himself available. “Not long ago, perhaps before Christmas, I don’t recall exactly, two St. Paul police officers reached out, left a |letter for me because I wasn’t absent — I — I wasn’t present, I was saying Mass at the time,” McDonough testified. “I turned the letter over to my attorney and asked my attorney …” At which point, his attorney Andrew Birrell interjects: “Don’t tell him what you told me.” ‘Media frenzy’ drove silence McDonough testified that he decided not to speak to the committee appointed by the archbishop to study the archdiocese’s child abuse policies because he felt there was a “media frenzy” surrounding its inquiry. “The media frenzy had a good deal to do with you,” he told Anderson. Both McDonough and Nienstedt were ordered to give sworn testimony by Ramsey County District Judge John Van de North as part of the lawsuit by John Doe 1, who claims he was abused by the Rev. Thomas Adamson in the 1970s. It was the first of more than two dozen lawsuits filed since last May, when Minnesota changed its statute of limitations on older child abuse cases. In his four-hour deposition, Nienstedt frequently mentioned McDonough, saying that he did a “good job” but also claiming that McDonough was aware of the details of wayward clergy, and he was not. Finnegan said at the news conference that the deposition was cut short at six hours, rather than the scheduled eight hours. The law firm will ask the court to depose McDonough and Archbishop John Nienstedt again.
Posted by Mike at 3:36 PM