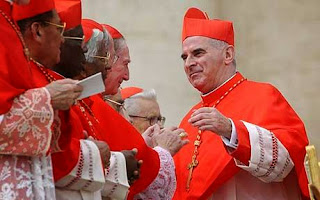 Cardinal Keith O'Brien, former Archbishop of St Andrews and Edinburgh, already bears the title of Most Disgraced Cardinal of the Twenty-first Century. He was the only cardinal-elector banned from voting in the conclave that elected Pope Francis. Why? Because he'd been accused of making sexual advances to young clergy, and admitted inappropriate sexual behaviour even after he was made a cardinal. He resigned his see and planned a quiet retirement in the Scottish countryside, only for Rome to force him into exile abroad. At which point his successor, Archbishop Leo Cushley, suggested that the old man "had been punished enough". Now we read this, by Joshua McElwee in the National Catholic Reporter: The Vatican has appointed a bishop known for aggressively investigating cases of sexual abuse to take testimony of clergy alleging sexual misconduct in Scotland's archdiocese of St Andrews and Edinburgh, where Cardinal Keith O'Brien was archbishop until resigning under disgrace in February 2013. The archdiocese's current leader, Archbishop Leo Cushley, announced the investigation in two letters sent to his clergy Tuesday. The letters, which were obtained by NCR Thursday from a priest of the archdiocese, announce what may be the first instance of an investigation by the Vatican of sexual misconduct by one of the church's cardinals, who are normally considered nearly above reproach in the Vatican's hierarchical structure. O'Brien, who had served as the archbishop of Edinburgh since 1985, resigned abruptly just days before Pope Benedict XVI abdicated in February 2013, following allegations by three priests and one former priest of the Scottish archdiocese that the cardinal had inappropriate sexual relations with them dating back some 30 years. Tuesday's letters from Cushley state that Pope Francis has asked the Vatican's Congregation for Bishops to send Maltese Auxiliary Bishop Charles Scicluna to "listen to and report the testimony offered by past and present members of the clergy … concerning any incidents of sexual misconduct committed against them by other members of the clergy whomsoever." There may be mixed feelings about this news from many Scots who knew Cardinal Keith O'Brien. He was an affable chap who enjoyed a dram and responded warmly to flattery: sly Alex Salmond worked this out early on, and sucked up shamelessly to O'Brien in an attempt detach Catholics voters from the Labour Party. I met the cardinal at a reception in Edinburgh and it was like talking to one of those twinkly-eyed Irish priests who build a personality cult in their parish. (Incidentally, Keith O'Brien is an Ulster Catholic by birth and upbringing.) His former friends may find it hard to banish the memory of this bonhomie, so much more agreeable than Archbishop Mario Conti of Glasgow's chippy grandeur. Also, he hasn't been charged with a criminal offence. On the other hand, there are reasons not to feel sorry for the former archbishop. First, he was a steaming hypocrite. Writing in the Telegraph in 2012, not long before the allegations against him were made public, the (actively homosexual) cardinal described gay relationships as "harmful to the physical, mental and spiritual wellbeing of those involved". Funnily enough, he didn't mention the harm caused by being sexually assaulted by your religious superior. Second, despite his disgrace, it seems that O'Brien was planning to use his retirement in Scotland to rebuild his network of contacts and, perhaps, undermine his successor. That was why the Vatican took the remarkable step of banishing him from the UK (not that it had any legal right to do so, of course, but it was either that or laicisation). Third, we don't know the extent of O'Brien's wrongdoing and at least one of his accusers seems determined to expose the truth. Can you blame him? One final caveat, however. It strikes me that the Catholic Church in Great Britain has escaped lightly from the paedophile scandals. I'm reading Betrayed: the English Catholic Church and the Sex Abuse Crisis by Richard Scorer, a lawyer specialising in child abuse cases. The chapter on Fr Michael Hill, the disgusting child-molester who was moved around by the then Bishop of Arundel and Brighton, Cormac Murphy-Connor, is shocking and suggests that the Church has still not been held fully to account for what happened. Perhaps I'll return to that subject. In the meantime, waste no sympathy on Keith O'Brien.
Posted by Mike at 4:24 PM