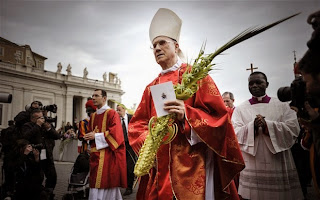 The Vatican's former secretary of state has reportedly angered Pope Francis with his plans to move into a luxury 6,500 square foot apartment as the pope urges clergy to adopt a more modest lifestyle. Cardinal Tarcisio Bertone, 79, was secretary of state from 2006 to 2013 and briefly in charge of the Holy See and its administration when Pope Benedict XVI suddenly resigned last February. After his election Pope Francis appointed Cardinal Pietro Parolin to replace him as secretary of state. According to the Italian daily La Repubblica, Cardinal Bertone's lavish restructure of an apartment in the San Carlo Palace inside the walls of the Vatican is causing unease. The flat is located next door to St Martha's Residence - the simple Vatican hotel where Francis has made his home after spurning the ostentatious Apostolic Palace where popes usually live on the other side of St.Peter's Square. La Repubblica said the cardinal's new apartment includes a large rooftop terrace and would be about 10 times bigger than Pope Francis' home once extensive renovations have been completed this summer. The cardinal is combining two apartments, one measuring 4,300 square feet formerly inhabited by the head of the gendarmerie and another flat where a Vatican monsignor lived, the article claimed. Three nuns who worked with him while he was Vatican secretary of state are also to live in his new residence. Cardinal Bertone's term of office was highly divisive in the Vatican administration. He was accused of being too authoritarian by his critics and he denied responsibility for the Vatileaks scandal in which the pope's former butler leaked confidential documents to the media exposing divisions within the Curia. Before his removal last October, the cardinal lashed out saying he was the victim of "moles and vipers" in the Vatican. Pope Francis is determined to create a "poor church for the poor" and urged clergy to adopt a more humble lifestyle. Last month he accepted the resignation of German bishop, Franz-Peter Terbartz-van Elst, dubbed the "bishop of bling" by the media for spending 31 million euro (£25 million) to renovate his plush residence. American archbishop Wilton Gregory recently apologised for a lapse in judgement after he built a $2.2 million (£1.3 million ) mansion for himself in an upscale Atlanta neighbourhood and has now pledged to sell it.
Posted by Mike at 8:19 PM