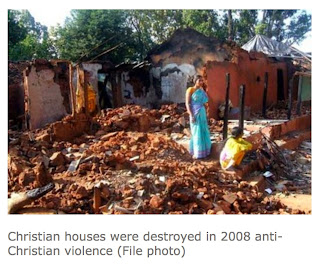 Police in Odisha refused to register a complaint on Thursday, after a Hindu mob threatened to attack Catholic villagers if they went ahead in building a church. An angry mob of more than 30 people in Ranipada village shouted at Christians on March 11 and took away stones meant for the church’s foundation, eyewitnesses said. The Hindus stood in front of the house of Catholic catechist Bhagwan Pradhan and threatened to beat him up and attack the community if he encouraged villagers to build the church. In 2008, a church in the village was burnt down by Hindu fundamentalists during anti-Christian violence in the district. A Protestant pastor who took refuge in the church during the violence was burnt alive. The violence that lasted several weeks killed some 100 people and displaced at least 50,000. "Police are refusing to accept the complaint saying that they will first investigate the matter and talk to the other side [the Hindus] but the law says that they have to first register the complaint and then go ahead with the investigation," said Ramakant Paricha, a lawyer who accompanied Pradhan to the police station. Paricha told ucanews.com that police might try to seek a compromise between the two sides. Pradhan, the complainant, told ucanews.com that all 52 tribal Catholic families in the village have been living in fear since the 2008 violence. He said Hindu extremists plowed up Church land in an act of intimidation last November. Police refused to register a complaint after that incident too, he said. "We are constantly threatened by these people. Since the [2008] violence, we have been denied access to a nearby forest for wood and a communal well in the village for water," he said.
Posted by Mike at 9:03 AM