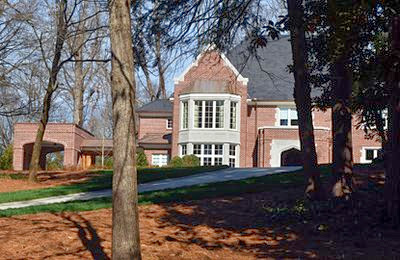 Bowing to critics, the Archbishop of Atlanta on Monday apologized for a lapse in judgment that made him proceed with a new, $2.2 million home for himself and said he may sell his Buckhead mansion if clerical bodies within the church recommend he do so. Noting that the “world and church have changed,” Archbishop Wilton Gregory said he “failed” parishioners when he didn’t fully consider the implications of his decision to move into the new home, made possible by a bequest from Margaret Mitchell’s nephew. Gregory, the leader of the Archdiocese of Atlanta, made his comments in the Georgia Bulletin, a Catholic newspaper. “I am disappointed that, while my advisors and I were able to justify this project fiscally, logistically and practically, I personally failed to project the cost in terms of my own integrity and pastoral credibility with the people of God of north and central Georgia,” Gregory wrote. Gregory earlier this year left his old home on West Wesley Road in favor of a new house on Habersham Road. The house, which cost $2.2 million to build, was funded by money left by Joseph Mitchell. Mitchell, nephew of “Gone With the Wind” author and a parishioner at the Cathedral of Christ the King, died in 2011. He left $15 million, plus his house on Habersham Road, to his parish and the archdiocese. His will stressed the money was to be used for his parish and for charitable causes. The archdiocese then demolished Mitchell’s house and built a 6,195-square-foot structure. Monsignor Rector Frank McNamee, pastor at Christ the King, plans to move himself and six priests to Gregory’s old house. Christ the King plans to spend $1.9 million — money from Mitchell’s will — as well as spend nearly $300,000 more in renovations. In an interview last month with The Atlanta Journal-Constitution, which published a front-page article on the building plans March 23, Gregory and McNamee said they decided to spend the money on the residences because Christ the King was growing, and needed more space. McNamee proposes razing the rectory, located on the Buckhead church’s campus. The decision touched off debate and anger inside and outside the parish. Parishioners inundated Gregory with emails, wondering if Pope Francis would approve. The pope has created international news with his emphasis on living frugally. “I failed to consider the impact on the families throughout the Archdiocese who, though struggling to pay their mortgages, utilities, tuition and other bills, faithfully respond year after year to my pleas to assist with funding our ministries and services,” Gregory wrote. “…To all of you, I apologize sincerely and from my heart.” Gregory said he will put the issue before the Archdiocesan Council of Priests in April and to the Archdiocesan Pastoral Council, a consulting body representing parishes, in May. Gregory said he will also call a special meeting of the Finance Council of the archdiocese. “At each of these meetings I will seek their candid guidance on how best to proceed,” Gregory wrote. Laura Mullins, a parishioner who met with McNamee and Gregory and asked the archbishop to sell his new home, isn’t convinced Gregory will sell his home. Gregory, she noted, said he would meet with advisory bodies — not the people, she said, with whom he should speak. “He needs to speak to the people in the pews if he wants to hear the truth,” she said Monday. “He needs to listen to his parishioners.
Posted by Mike at 9:17 AM