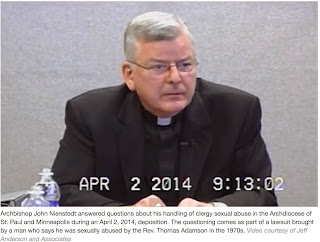 Archbishop John Nienstedt acknowledged in sworn testimony that he took steps to hide information on abusive priests and never provided complete files to police, according to a transcript released today. Nienstedt said he had followed a subordinate's advice that he keep no written notes of certain discussions, in case those notes should later become public in legal proceedings. He said that he didn't publicly disclose which priests were being monitored, and that he relied on others to keep parish trustees informed. • Transcript: Nienstedt's deposition Nienstedt made the remarks in a four-hour deposition taken April 2 as part of a lawsuit filed by a man who said he was sexually abused by the Rev. Thomas Adamson in the mid-1970s. The man alleges the Archdiocese of St. Paul and Minneapolis and the Diocese of Winona created a public nuisance by keeping information on accused priests secret. The man's attorneys, Jeff Anderson and Mike Finnegan, argued that the deposition could provide evidence of a pattern of deception by the archdiocese. "The archbishop and his predecessors have promised zero tolerance," Anderson said at a news conference Tuesday, but "there has been an ongoing tolerance of sexual predators" among the clergy of the Twin Cities archdiocese. Throughout the contentious questioning, Nienstedt portrayed himself as having relied on others to handle the clergy sexual abuse crisis. He professed little knowledge of the scandal within his archdiocese and said he assumed the archdiocese was safe for children. Nienstedt said that it "didn't occur" to him to ask for a list of abusive priests when he arrived in 2007 and that he didn't review any clergy files. He said he did not know that one priest had pleaded guilty to sexually abusing a boy in the 1980s or that another was receiving secret disability payments for pedophilia. "Typically, I'm a hands-on person, but I have to delegate responsibilities," Nienstedt testified. Nienstedt has been under intense scrutiny for months since an MPR News investigation found that he failed to report possible sex crimes to police. Several priests have publicly criticized Nienstedt's leadership, and at least one has called for his resignation. The archbishop shifted responsibility several times in the deposition to the Rev. Kevin McDonough, who served as vicar general for two of Nienstedt's predecessors. Nienstedt appointed McDonough delegate for safe environment, a position responsible for ensuring the safety of children in the archdiocese. Nienstedt said McDonough advised him that some conversations not be written down because the notes could become public in a lawsuit. Nienstedt said he followed McDonough's suggestion in several cases but could not recall the details. ........... Read entire article at Minnesota Public Radio
Posted by Mike at 2:53 PM