Worried about our liturgy

One of the things that has shocked me as I began looking for Catholic related items on the internet is the large number of very angry traditionalist or reactionary Catholics who hate everything about Vatican II and the aggiornamento it brought to the church. Now they see their time coming to turn back the Vatican II reforms to the good old days of Latin Mass, blind obedience, etc. This is especially evident in their expectations for changes in the liturgy. FOr example,

A new discussion has erupted regarding the limitations of the General Instruction of the Roman Missal concerning the music when the new missal comes into force. It appears very clear that these changes will be sweeping (no fantasy song at the Entrance and at Communion, say) and will be aimed at recovering some reverence and Catholic dignity to the Mass. I do not doubt that disobedience and pretending not to understand the instructions will be rampant at the beginning, but in time things will slowly adjust.
(this was taken from the mundabor.wordpress.com blog)

They mock the music, dress, affect, sincerity of clergy and lay people of the past 40 years. I am not a professional musician or chorus member. Music which I can sing and participate in the Mass with helps me to worship and saves me from being a mere spectator in the audience as was often the case in my youth before Vatican II. Below is a mocking cartoon showing some of their strong dislikes. 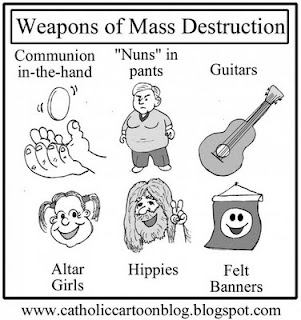 Email ThisBlogThis!Share to TwitterShare to FacebookShare to Pinterest
Labels: liturgy