Ultra-conservative bishops seem to be more and more in the ascendance with a preference for the "good old days" of pre-Vatican II. One common symptom of this is a current of female degrading, from making fun of female altar servers to not wanting female eucharistic servers. But I was kind of shocked to see the following story coming from Florida a year ago.

SARASOTA COUNTY, FLA March 2010 - In a move that brings a national debate home to Southwest Florida Catholic churches, Bishop Frank Dewane has reminded priests that only men should have their feet washed during a pre-Easter ceremony.
Many Catholic priests in Southwest Florida have customarily washed the feet of male and female parishioners on the Thursday before Easter in a symbol of humbly serving others.
……
Dewane sent his "Rules of the Road" letter to churches on Friday for the series of Masses and events leading up to Easter, and it included the foot washing clarification, the diocese said.
…
"I don't know why men's feet are more worthy than women's," said Alice Campanella of Voice of The Faithful in Boston, where Archbishop Sean O'Malley upset many Catholic women in 2005 by inviting only men to participate in the Holy Thursday ritual.
The Vatican told O'Malley he could wash women's feet, as is the practice of many priests, the Boston Globe reported at the time.
…
The role of women in church practices has been a constant issue for the Catholic church. Polls show that about two-thirds of U.S. Catholics believe women should be ordained, an increase of 20 percent over similar polls in the 1980s.
In a Pew Research Center survey, the treatment of women in the church was cited by 39 percent of former Catholics as part of the reason they left. 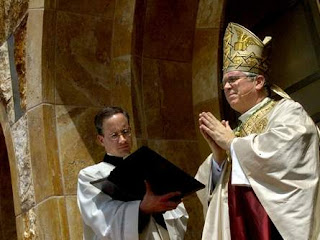 Email ThisBlogThis!Share to TwitterShare to FacebookShare to Pinterest
Labels: hierarchy and church life