Exequies of Archduke Otto of Austria 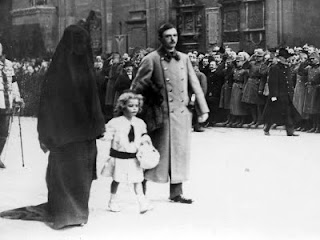 Sometimes it's difficult to understand statements by various church leaders, but occasionally I am left completely dumbfounded. We recall that "The Great War" devastated Europe and killed off most of a generation of young men. As a result, the Austro-Hungarian empire ceased to exist and with it the Habsburg emperors. Except the Vatican still recognizes them referring to Otto Habsburg as royal highness. The following is from the New Liturgical Movement website. The picture shows Otto with his father Blessed Charles and mother Empress Zeta.

On July 4th, 2011, at the venerable age of 98, died Archduke Otto of Austria, eldest son and heir of Blessed Charles, last Emperor of Austria and Apostolic King of Hungary. You can read a short biography of the late Archduke Otto on his official website or his obituary in the Telegraph.

This is the telegram which Our Holy Father Pope Benedict sent to Archduke Karl, the eldest son and heir of the late Archduke Otto (NLM translation):


To His Imperial Highness Archduke Karl of Austria

It is with deep sympathy that I have learned of the passing of your father, H.I.R.H. Archduke Otto of Austria. In the hour of grief over this grievous loss I unite myself with you and the entire Imperial family in prayer for the departed. In a long and fulfilled life Archduke Otto became a witness to the history of Europe and its vicissitudes. Responsible before God and conscious of an important heritage, as a great European he worked tirelessly for peace, harmony between peoples, and a just order on this continent. May God our Lord amply reward his manifold work for the good of men and grant him the life in abundance in His heavenly kingdom. Through the intercession of Mary the Mother of God I willingly impart to the relatives and all who mourn Archduke Otto and pray for his eternal salvation my Apostolic blessing.
Posted by Mike at 9:59 PM

Email ThisBlogThis!Share to TwitterShare to FacebookShare to Pinterest
Labels: hierarchy and church life