Too many 'firsts' for Bishop Finn, Kansas City diocese 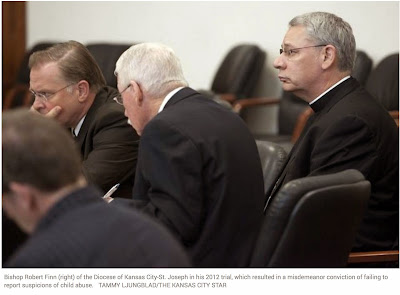 The Kansas City-St. Joseph Diocese of the Roman Catholic church keeps breaking new ground — and taking its members where they don’t want to go. Its leader, Robert Finn, was the first bishop to be found guilty in the church’s long-running sexual abuse scandal. He was convicted on a misdemeanor charge of failing to alert the proper authorities after the discovery of photographs of children taken by a pedophile priest, Shawn Ratigan. Now the diocese is reportedly the first to be held to account in a breach of contract case. And in a big way. An arbitrator has ordered the diocese to pay $1.1 million for violating the terms of a 2008 settlement that was intended to protect children. That settlement was the result of a sexual abuse case brought against 12 priests or former priests in the diocese. Plaintiffs were awarded $10 million, and also achieved some nonmonetary commitments. One was an agreement by the diocese to immediately report suspicions of child abuse. After the Ratigan allegations surfaced, the plaintiffs alleged breach of contract. Here’s what Rebecca Randles, an attorney for the plaintiffs, told The Kansas City Star: “To bring a breach-of-contract claim involving a settlement in a priest sexual abuse case has never happened before. There are a number of settlements across the country that contain nonmonetary commitments, and they allow for plaintiffs to hold bishops and dioceses accountable to the promises they’ve made about keeping children safe. But it’s been business as usual, at least in the Kansas City diocese.” So, another unwanted first. Hollis Hanover, the arbitrator, was scathing in his order. He said it was his opinion “that the Diocese, with its leadership and higher level personnel and their unavoidable biases and ingrained priorities, was and is constitutionally incapable of placing the preservation and protection of the clergy culture in a subordinate position to any other consideration, including the timely reporting to law enforcement of a priest involved in the use of diocesan children as pornography models.” Hanover added he hoped he was “dead wrong in my opinion that this Diocese as presently constituted will not mend its ways.” The diocese has appealed Hanover’s order, arguing that the arbitrator exceeded his authority. The case will go before a Jackson County district judge. Even before this latest development, plenty of area Catholics have had it with Finn. A group of parishioners in the diocese petitioned Pope Francis to take disciplinary action against the bishop, including a church penal proceeding. Part of the concern, beyond the sheer awfulness of the allegations against Finn and some of the priests, is that the diocese will be bankrupt. Besides the $10 million 2008 settlement, the diocese is paying $13 million in legal fees and settlement damages to two families whose daughters were victims of Ratigan. Now there is the specter of an additional $1.1 million. And you have to wonder if the end is even in sight. There will be no healing for the Kansas City-St. Joseph Diocese as long as Robert Finn is at its helm. In what other institution would a leader so damaged go for so long without consequences?
Posted by Mike at 10:48 AM