Church of England votes to allow women to become bishops 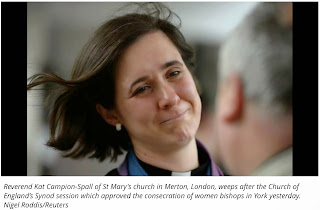 When the end finally came, it could have been mistaken for the resolution of a council committee over some trifling town centre planning dispute. But as the legal registrar of the General Synod, dramatically attired in wig and flowing white collar, completed the formalities in dry sonorous tones, it was the moment the Established Church entered the 21st Century. It is the last great institution of British life to open its upper reaches to people of both genders. For the first time since Christianity arrived in that part of the world, the church in England can now be led by a woman. Century It has taken a century of campaigning and 40 years of often bitter legal wrangling. Perhaps because of this, Archbishop of York, Dr John Sentamu, had instructed members of the General Synod, sitting in York, that the results of the historic vote must be heard in silence. He had politely turned down a request for normal rules to be suspended, insisting that the procedures must be respected until all formalities had been completed. Nonetheless, a handful of supporters in the public gallery briefly whooped with joy. They were quickly shushed, finding themselves on the receiving end of some fierce clerical stares from the Archbishop of Canterbury himself, Justin Welby, and Dr Sentamu. "The Africans always say, let's keep the best dish to the end," he told them. And so it was on this occasion. When the time came for the celebration to begin, Dr Sentamu led the way. He stood on the platform and began singing the African hymn 'We Are Marching in the Light of God', leading hundreds in song. While most sang and clapped along with typical Anglican reserve, a handful seized the opportunity to dance in their rows, including a brief, awkward turn from Justin Welby. When Dr Sentamu ended the meeting with the words, "Thank you Father, Son and Holy Spirit," the chamber erupted into raucous applause. The vote, passed by an overwhelming majority, came less than two years after the shock defeat of legislation to allow women bishops sent the church spiralling into its biggest crisis in modern times. Yesterday's decision now clears the way for the first female bishops to be appointed as early as Christmas and raises the very real possibility that the next Archbishop of Canterbury or York will be a woman. Outside the concrete conference hall where the vote took place champagne corks were popping as members rushed out to celebrate. Among those was the Rev Kat Campion-Spall (35), a curate in Merton, south-west London, who been at the previous vote with her baby daughter Astrid in her arms to bear witness to what she had hoped would be history being made. This time her children were at home with their father and she was celebrating with gusto. "This is everything that we hoped for then and more," she said. "It is just wonderful that at last we can move on." Sally Barnes, whose late husband the Rev Prebendary Donald Barnes was one of the pioneers of the campaign for women's ordination, broke into tears as the results of the vote were read out. "I just thought how he would have rejoiced – I wish he could have been physically here, I know people say he will be rejoicing in Heaven." The Bishop of Oxford, the Rt Rev John Pritchard, was among the crowds sipping champagne from plastic cups outside. "This means at least we have now got a fully functioning church where every human being is capable of answering God's call," he said. "At last we can achieve a fully healthy church with all the gifts of humankind available to our leadership to enrich the church and our message to the world." Joining in among the hugs and tears were some who had voted against the legislation. Opposed Father David Houlding, an Anglo-Catholic who once staunchly opposed the ordination of women bishops, said he had voted against on grounds of conscience but wished the legislation well. "I'm relieved it has just gone through with such good arrangements in place, because it could once have gone through without those arrangements and then it would have been really serious," he said. The Rev Preb Rod Thomas, leader of the traditionalist Reform evangelical group, said he took reassurance from the public pledge of the Archbishop of Canterbury, the Most Rev Justin Welby, that he would personally ensure arrangements promised to enable traditionalists to "flourish" in the Church of England after women bishops would be stuck to. "If I did not think that was likely I could not support this legislation," the archbishop insisted. "You don't chuck out family or even make it difficult for them to be at home, you love them and seek their well-being even when you disagree." (© Daily Telegraph, London)
Posted by Mike at 10:09 PM