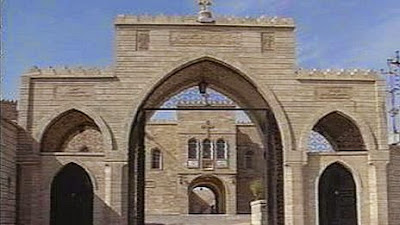 Islamist militants in Iraq are reported to have seized an ancient monastery near Mosul and expelled the monks. Local residents said monks at the Mar Behnam monastery were allowed to take only the clothes they were wearing. The monastery, which dates from the 4th Century, is a major Christian landmark and a place of pilgrimage. Christians have fled Mosul after the Islamic State in Iraq and the Levant (Isis) told them to convert to Islam, pay a tax or face death. Isis has seized large parts of Syria and Iraq and said last month it was creating an Islamic caliphate. Mosul itself is now said to be empty of Christians. The Mar Behnam monastery is run by the Syriac Catholic Church and is near the predominantly Christian town of Qaraqosh, to the south-east of Mosul. Analysis by BBC Arab affairs editor Sebastian Usher Ancient landmarks like Mar Behnam show how deeply embedded Christianity is in the culture and history of Iraq. Just as in many other Arab countries, churches and monasteries are a timeless part of the landscape. For years, though, Christians have been warning that their hold in parts of the Middle East is weakening. In Iraq, the lightning seizure of large parts of the country by Isis has been a frightening new threat. Thousands have fled Mosul, leaving it for the first time without a Christian community, after Isis gave them an ultimatum to submit to its authority or face death. But if Iraqi Christians face penalties and discrimination under Isis, other religious sects are faring even worse. Yazidis and Shia Muslims risk being taken out and killed on the spot for their beliefs. A member of the Syriac clergy quoted the militants as telling the monastery's residents: "You have no place here any more, you have to leave immediately." He said the monks asked to be allowed to save some of the monastery's relics but the fighters refused. Local Christian residents told AFP news agency that the monks walked for several miles before they were picked up by Kurdish fighters. Earlier this month, Isis issued an ultimatum in Mosul, citing a historic contract known as "dhimma," under which non-Muslims in Islamic societies who refuse to convert are offered protection if they pay a fee, called a "jizya". "We offer them three choices: Islam; the dhimma contract - involving payment of jizya; if they refuse this they will have nothing but the sword," the Isis statement said. Isis issued a similar ultimatum in the Syrian city of Raqqa in February, calling on Christians to pay about half an ounce (14g) of pure gold in exchange for their safety. Iraq is home to one of the world's most ancient Christian communities but its population has dwindled amid growing sectarian violence since the US-led invasion in 2003.
Posted by Mike at 2:24 PM