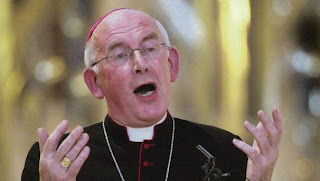 A survivor of clerical sex abuse has asked the Pope to stand down the Archbishop of Armagh as the leader of the Catholic Church in Ireland. Irish woman Marie Kane was one of six victims of abuse who met Pope Francis during his first meeting with survivors yesterday. The Pontiff promised to hold bishops accountable for the protection of minors and begged forgiveness from the victims of abuse. The Pope celebrated a Mass with the six survivors at his Vatican hotel but in his homily he did not spell out whether that accountability would include firing bishops and other prelates who shuffled paedophile priests between parishes to avoid bringing shame upon the Catholic Church. Victims' advocacy groups around the world have pressed the Vatican for decades to severely discipline any Ms Kane (43) said she asked Francis to remove all-Ireland primate Cardinal Sean Brady from his post because of how he handled abuse allegations. Ms Kane told The Irish Times that she told Francis a "cover-up is still happening" and he has "the power to make these changes". She said he replied that "it was difficult to make these changes". "But it's a big thing with me that Sean Brady is gone," she added. Ms Kane, who lives in Carlow, was abused by a priest for three years until she was 18. "It's a big thing with me that there are still members of the hierarchy there who were involved in the cover-up. I feel personally they (the Church) cannot contemplate any change happening, there will be no success" as long as such people remained in place, she said in an interview. She described the meeting as "a positive experience" although several victims' groups blasted the meetings as "a PR event". The Vatican quoted Francis as expressing personal "sorrow" in his homily at the private Mass with the victims for the "sins and grave crimes" of clerical sex abuse against them. Francis pledged "not to tolerate harm done to a minor by any individual, whether a cleric or not". "All bishops must carry out their pastoral ministry with utmost care in order to help foster the protection of minors, and they will be held accountable," he said, according to the English translation of his Spanish homily. "Before God and his people, I express my sorrow for the sins and grave crimes of clerical sexual abuse committed against you. And I humbly ask forgiveness," Francis said. Without naming specific cases, Francis noted that the abuse caused some victims to resort to addictions or even suicide. "These deaths of these so beloved children of God weigh upon the heart and my conscience and that of the whole Church," he said. German survivor and advocacy spokesman Norbert Denef called the meeting "nothing more than a PR event". Background Cardinal Sean Brady has been criticised for swearing two boys to secrecy during a 1975 internal investigation into notorious paedophile priest Fr Brendan Smyth. The allegations were not handed over to the police, and Smyth continued to abuse children. Cardinal Brady publicly refused calls to resign, but it is thought that his private offer to do so was rejected by the Vatican.
Posted by Mike at 6:41 PM