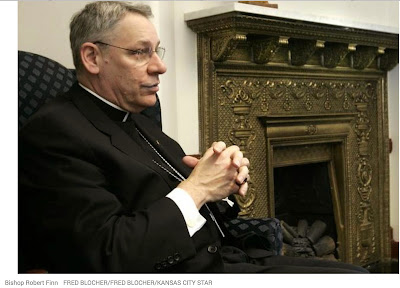 An arbitrator has ordered the Kansas City-St. Joseph Diocese to pay $1.1 million for violating terms of a 2008 settlement that were designed to protect children from sexual abuse by priests. The order stems from a breach-of-contract lawsuit filed nearly three years ago alleging that the diocese and Bishop Robert Finn violated parts of the settlement, putting children in danger. The lawsuit, filed in Jackson County Circuit Court by 44 of the 47 plaintiffs from the earlier case, did not seek damages but asked a judge to force the diocese to arbitration to ensure that it had complied with the reforms agreed upon in the settlement. In his highly critical order, arbitrator Hollis Hanover found that the diocese had breached five of the terms of the 2008 agreement. He noted that the plaintiffs could have sought to declare the contract void and collect what likely would have been “a far larger award.” “They have instead opted to seek damages for these noted breaches and to maintain the contract in force for the protection of children in the future,” Hanover wrote. “I here honor their preference and join in their hope that I am dead wrong in my opinion that this Diocese as presently constituted will not mend its ways.” The diocese said Tuesday that because the matter was pending, it could not comment beyond what was submitted to the court in a motion it filed to vacate the order. ............. Rebecca Randles, an attorney for the plaintiffs, called the breach-of-contract case unprecedented. “To bring a breach-of-contract claim involving a settlement in a priest sexual abuse case has never happened before,” she said. “There are a number of settlements across the country that contain nonmonetary commitments, and they allow for plaintiffs to hold bishops and dioceses accountable to the promises they’ve made about keeping children safe. But it’s been business as usual, at least in the Kansas City diocese. .......... read full article at Kansas City Star
Posted by Mike at 9:20 AM