Huffington Post (April 1, 2010) -- The story of the Rev. Gerald Fitzgerald, a pioneering priest whose name surfaced this week as one of the first clergymen to repeatedly warn the Vatican about pedophile priests, started off as heroically as a Bing Crosby movie.

The Boston-born Fitzgerald drove from Massachusetts to a deserted, picturesque canyon in New Mexico where he founded the Roman Catholic Church's first order for wayward priests in 1947, three years after Crosby starred as a young, idealistic priest in "Going My Way."

But in the end, things did not go the way Fitzgerald had planned for his Jemez Springs order, called the Servants of the Paraclete. He had envisioned a place for the healing and renewal of priests with alcohol problems and other emotional issues easily identifiable in the 1940s. He never expected that many of the priests who would come to his new retreat would be pedophiles. 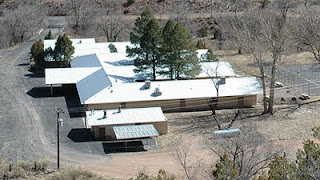 Courtesy of Valles Caldera Trust / AP
The Rev. Gerald Fitzgerald headed the Servants of the Paraclete, which housed wayward priests. The Jemez Springs, N.M., facility is now used as a science and education center.

In an especially ironic twist, Fitzgerald's prescient warnings about pedophile priests came true in what happened to his own order after he was forced out in a power struggle around 1965. The battle revolved in part around his belief that pedophile priests were incurable. He suggested they be housed on an island for treatment.

Fitzgerald wrote a follow-up letter to Pope Paul VI in 1963 after he went to Rome to warn the pontiff that pedophile priests were dangerous and should be removed from the ministry.

The letter is among documentation used in litigation by lawyers for California clergy abuse victims. It has been analyzed this week as questions surrounding how much the Vatican knew about child sex abuse and how much it may have helped cover it up increase.

The Paracletes eventually became known as "Club Ped," or as one lawyer termed it, "a dumping ground for toxic ecclesiastical waste."
........
Fitzgerald, who died in 1969, never expected to deal with the serious issues presented by the pedophile priests who began arriving at the Jemez Springs order in the late 1940s, said the Rev. Liam Hoare, vicar general of the Servants of the Paraclete. He runs what is left of the order in the United States, a small retreat for troubled priests in Dittmer, Mo."They came on Greyhound buses, by trains, often sent by bishops who never told the Paracletes what their real problems were," Hoare said in a telephone interview with AOL News. "Back in the '40s nobody talked about this. You can't look at it through 2010 lenses."Fitzgerald became so alarmed by the gravity of pedophiliac priests' disorders that he wrote letters for years to U.S. bishops and met with Pope Paul VI in Rome warning that such priests were "devils" and should be defrocked."These men, Your Excellency, are devils and the wrath of God is upon them and if I were a bishop I would tremble when I failed to report them to Rome for involuntary layization," Fitzgerald wrote in a 1957 letter to an unnamed archbishop. Nor did he want them at his retreat, Hoare said. Fitzgerald even tried to buy a Caribbean island where they could be treated in isolation without fear they could harm children."It is for this class of rattlesnake I have always wished the island retreat -- but even an island is too good for these vipers of whom the Gentle Master said it were better they had not been born -- this is an indirect way of saying damned, is it not?" Fitzgerald wrote in the same letter.
.....................
Posted by Mike at 7:25 PM