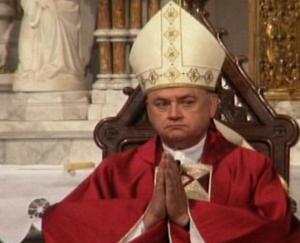 The spectacle of Bishop John Magee abjectly apologizing this week for his utter failure to curb pedophile priests in his Cork diocese makes the blood run cold.

Magee bolted out of the country when the Cloyne report was made public. It was a devastating document, detailing in great precision the horrific cover-up.

Magee has now admitted his actions, which came after the flood of sexual abuse stories had been made public in Ireland.

In other words, Magee is culpable for placing children in harm’s way, and he has now admitted this. The next step should be to arrest the bishop.

If he was a school principal who knowingly ignored sexual abuse of pupils he undoubtedly would be apprehended.

The clerical collar should be no reason not to do the right thing.

It is also the case that every other priest and bishop in Ireland are being tarred by the refusal to cast out this evil among them.

If the church is ever to regain its reputation it must act to differentiate between those bishops and priests who do their best to act on their holy orders, and a runaway bishop who was openly condoning pedophile priests in his district.

Magee, no doubt, has powerful friends in the Vatican where he was secretary to three popes, but given the Vatican’s attempts to dictate even to Irish bishops who wanted to expose the sex abuse cases, that should not be enough to prevent prosecution.

Magee should be made an example of in a disgraceful episode that has scarred countless lives.

Taoiseach (Prime Minister) Enda Kenny has referred to the “sacred space” of childhood and the need to protect children.

What greater message could Irish authorities send than to arrest Magee as a child sex enabler, which he clearly was?

Full article at Irish Central
Posted by Mike at 7:25 PM