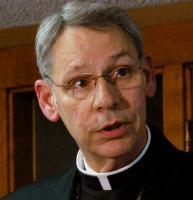 In a move rare in U.S. Catholic history, but one that indicates growing exasperation with the way the bishops of the Catholic church have handled the now decades’ long clergy abuse scandal, a local newspaper, the Kansas City Star , June 4 called for the resignation of Kansas City-St. Joseph Bishop Robert Finn.

The editorial follows two weeks of front page stories in the paper detailing the way Finn failed to remove a priest from active parish ministry -- and work among young children -- for a year after detailed allegations of priest’s misconduct were hand delivered to his vicar general in a letter by a Catholic elementary school principal.

The priest, Fr. Shawn Ratigan was arrested last month after local law enforcement officials were notified by the diocese that six months earlier they had learned the priest had gathered photographs, some nude, some “up skirt” photos.

The parents of one of the girls filed a lawsuit Thursday against the diocese.

Recent child sexual abuse allegations and disturbing inattention to earlier warnings make it clear it’s time for Bishop Robert Finn to step down.
It’s painful to believe the most vulnerable in his flock weren’t protected. Allegations that priests in the Diocese of Kansas City-St. Joseph were harming children apparently were downplayed, even in the aftermath of a stream of national scandals. Finn appears to have pushed legal limits and shattered moral guidelines by delaying actions. He has tragically shaken the faith of many who seek peace in churches under his supervision.

In 2008, when the church agreed to settle a lawsuit with 47 plaintiffs for $10 million, Finn promised that the diocese would take steps to ensure that children from that moment on were safe in religious settings. Yet he now says he regrets not actively pursuing newer allegations against a priest in his diocese.

Clearly, Finn could not reasonably have been expected to have governed the actions of every priest under his jurisdiction. And he is not responsible for what happened before he assumed his office in 2005. However, there was a disturbing pattern in his diocese. As of now, 18 current and former priests have been accused of abuse.
Given those numbers, Finn can reasonably be held to a higher degree of diligence than he exhibited. And it’s understandable that some parishioners perceive a cavalier manner in which he loitered with allegations.
Our society has enacted laws to punish those who victimize children. But there are also laws against ignoring suspicions of child abuse.

A resignation here could be step one in rebuilding faith in the diocese. For step two, area prosecutors must actively pursue all relevant criminal charges against all involved in these scandals.

These steps are necessary to protect society, to protect the Catholic Church and, most of all, to protect our children.
Posted by Mike at 8:00 PM