Ratigan could face at least 15 years, and up to 30 years, in prison if convicted on all counts.

U.S. Attorney Beth Phillips is expected to discuss the new charges at a press conference late this afternoon in Kansas City.

State authorities charged Ratigan in May after church officials of the Roman Catholic Diocese of Kansas City-St. Joseph turned over images of children they had discovered on the priest’s computer.

According to state court records, the pictures allegedly included so-called “up-skirt” photos of girls under the age of 12 and a nude photo of a girl that focused on her genitals.

.....
Bishop Robert Finn acknowledged that in 2010 a diocesan school principal complained about Ratigan’s conduct around children and that church officials knew about the computer images months before they handed them over to authorities.

Finn has said he did not read the principal’s complaints about Ratigan until after the priest had been charged in May. And when the diocese learned about the computer images in December 2010, its lawyers advised that they did not “constitute child pornography, as they did not depict sexual conduct or contact,” Finn said in a statement in May. 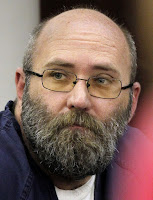 of Fr. Ratigan's activities
Posted by Mike at 8:42 PM