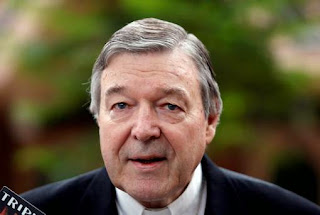 A top Vatican official has come under fire for drawing an analogy between the Catholic Church’s response to child abuse and a trucking company. Cardinal Pell, Australia’s leading Catholic cleric and a former archbishop of both Melbourne and Sydney, said it would not be appropriate for legal culpability to be ‘foisted’ on church leaders, although he acknowledged the church had a moral obligation to victims of paedophile priests. Speaking to a Royal Commission into Institutional Responses to Child Sexual Abuse in Melbourne, Cardinal Pell cited the hypothetical example of a woman being molested by a truck driver. "If the truck driver picks up some lady and then molests her, I don't think it's appropriate, because it is contrary to the policy, for the ownership, the leadership of that company to be held responsible," he said via video link from Rome. "Similarly with the church and the head of any other organisation. "If every precaution has been taken, no warning has been given, it is, I think, not appropriate for legal culpability to be foisted on the authority figure." Cardinal Pell’s comments sparked outrage as support groups claimed his ‘outrageous’ comments showed a lack of compassion for victims of abuse.
Posted by Mike at 1:20 PM