Bishop: 'no purpose' in releasing names of abusive priests 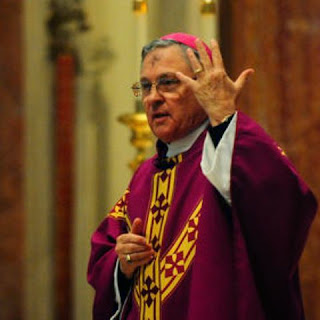 Ten years after admitting the Diocese of Lafayette and its insurers paid more than $26 million to the families of children molested by priests, Bishop Michael Jarrell this week refused to release the names of those priests. "Bishop Jarrell sees no purpose in such action," Monsignor Richard Greene, media liaison, wrote in response to The Daily Advertiser's request for the priests' names. The Advertiser made the request after sworn statements from the 1990s came to light recently, including allegations by a young man that a priest still ministering in Lafayette sexually abused him. The priest and Diocese denied the allegations. "The obvious purpose is that failing to reveal these names may pose a serious threat or danger to even more innocent children in this diocese than these men have already injured," Ray Mouton wrote in an email to The Advertiser. Mouton is the attorney who represented Gilbert Gauthe in the first widely known case of pedophilia by a Catholic priest in the Diocese of Lafayette. Now living in France, Mouton campaigns for the rights of survivors of abuse, co-authored a 1985 report hailed by the media as the most significant document issued in the priest sex abuse scandal, and wrote "In God's House," a novel drawn from his extensive experience dealing with this issue. In 2004, Jarrell said the Roman Catholic Diocese of Lafayette and its insurers paid about $26 million to 123 victims of priests who served in the diocese between 1950 and 2002. The names of those priests were never made public despite policies by the Catholic Church to be transparent about child sexual abuse issues. "It is unconscionable, not to mention unchristian, for a Catholic bishop to shield and protect the identity of men whom he has stated have had credible complaints of sex abuse made against them for which his diocese paid financial settlements for victims, for these men are criminals who have committed heinous sex crimes against children," Mouton wrote. The United States Conference of Catholic Bishops in 2005 adopted the Charter for the Protection of Children and Young People that outlines policies and actions church leaders are to follow in responding to allegations of sexual abuse of minors. Jarrell said he may ask the Diocese Review Board, required by the Charter, to advise him on the handling of the priest still serving in Lafayette who was accused of misconduct in the 1990s. Of three accused priests, one commits suicide, one admits rape The Charter also states that dioceses are "to be open and transparent in communicating with the public about sexual abuse of minors by clergy," report allegations of abuse to "public authorities" and cooperate with their investigation, and if the allegation is deemed not substantiated, take every step possible to restore the priest's good name. Jarrell told The Advertiser on Wednesday the allegations against the priest still serving were investigated and found to be unsubstantiated. The Advertiser asked Jarrell to release the Diocese's investigation file or report on the priest still serving in order to clear his name and show the public the allegations were investigated properly. Jarrell responded through Greene that retired Bishop Harry Flynn conducted the investigation in 1992 and the police were not involved. There's no record that Flynn or any other investigators met with the alleged victim, Greene wrote. There's very little in the file and no report, he said. Abbeville attorney Anthony Fontana Jr., who represented some priest abuse victims, told The Advertiser this week that Flynn told him the priest had gone away for treatment and been "cured." The priest had been accused of sexually abusing a boy and making advances toward adult males. Greene said in response to our questions that medical information about personnel is confidential, but that the priest "has never been sent by the Diocese for treatment for pedophilia." In a 1995 deposition cited in a federal lawsuit by the Diocese against its insurers, Frey admitted that when priests temporarily left the Diocese "due to allegations of sexual misconduct, the most that their personnel files would reflect would be that they left 'for reasons of health.'"
Posted by Mike at 3:42 PM