Francis: those who take a vow of poverty but live luxurious lives hurt people's souls 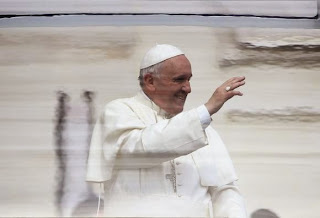 The hypocrisy of those consecrated men and women who profess vows of poverty, yet live like the rich, wounds the souls of the faithful and harms the Church,” Francis said. Francis spoke frankly at today’s meeting with members of Korea’s religious communities on the third day of his visit to the “Land of the Morning Calm”. The Bishop of Rome also warned men and women religious against the temptation of “adopt[ing] a purely functional, worldly mentality which leads to placing our hope in human means alone and destroys the witness of poverty which our Lord Jesus Christ lived and taught us.” Sister Lee Kwang-ok jnb was also frank with the Pope, whom she greeted on behalf of Korea’s nuns. She talked about a Korean society that is “suffering in this era of globalization because of the domination of capitalism and political power and a Church that has been contaminated by secularism worsened by neoliberalism.” Pope Francis is not one to mince his words. At the start of the meeting he informed participants at the meeting that he couldn’t stay for the recitation of the Vespers as scheduled because he was running behind schedule and had to return to Seoul by helicopter. As it was getting dark there was “a danger he and the crew might end up crashing into a mountain.” Francis may speak frankly but even today, the suggestions and points he made were not imbued with any stern and enraged and rigourism. In Francis’ opinion, religious only succumb to wealth and power because there is something lacking. This happens when consecrated men and women lose touch with God’s mercy, the only true source of their vocation: “Only if our witness is joyful will we attract men and women to Christ,” Francis told a gathering of religious brothers and sisters at the School of Love Training Centre in The Pope reminded Korea’s religious communities that only by renewing their experience of God’s mercy can they persevere in each of the evangelical counsels – obedience, chastity, and poverty: “Your chastity, poverty and obedience will be a joyful witness to God’s love in the measure that you stand firmly on the rock of his mercy.” The desire to achieve perfect charity, which is an ideal of religious life does not mean an obsession with perfectionism. Recognizing one’s own weaknesses and fragilities can become the first step to realizing our need for Christ’s grace and resist the temptation of seeing ourselves as self-sufficient: “Even when we are weary, we can offer him our hearts burdened by sin and weakness; at those times when we feel most helpless, we can reach out to Christ, “who made himself poor in order that we might become rich” (cf. 2 Cor 8:9). This fundamental need of ours to be forgiven and healed is itself a form of poverty which we must never lose sight of, no matter how many advances we make in virtue.” Francis took the meeting with Korea’s religious communities as an opportunity to emphasize in simple terms what it is that gives birth to and fuels a Christian vocation. Not just religious vocations. And not just in Korea but throughout the world.
Posted by Mike at 9:01 PM