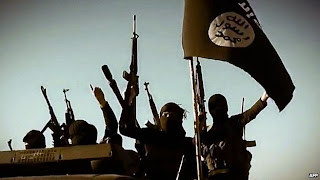 Up to a quarter of Iraq's Christians are reported to be fleeing after Islamic militants seized the minority's biggest town in the country. The Islamic State (IS) group captured Qaraqosh in Nineveh province overnight after the withdrawal of Kurdish forces. Meanwhile, the UN says some of the 50,000 members of the Yazidi religious minority trapped by IS on Mount Sinjar have been rescued. IS controls parts of Iraq and Syria and says it has created an Islamic state. Nineveh, located 400km (250 miles) north-west of Baghdad, is home to a large number of religious minorities. Tens of thousands have been forced to flee since IS, a Sunni Muslim group formerly known as Isis, launched their onslaught in the north in June. In other developments: A suicide bombing in a Shia Muslim area of Baghdad killed at least 12 people IS said it had captured the strategic Mosul dam on the Tigris river - a claim denied by Kurdish forces who insist they are still in control At least six people died when a car bomb exploded near a Shia mosque in the northern city of Kirkurk A majority of Nineveh inhabitants left their homes overnight, according to Fraternite en Irak, an international Christian organisation based in Paris. As many as 100,000 people are believed to be fleeing toward the autonomous Kurdistan Region. Pope Francis has made an impassioned appeal to the international community to do much more to address the crisis. A Vatican statement said the Pope appealed for "all necessary help" to be given to those forced to flee their homes, "whose fate depends entirely on the solidarity of others". French Foreign Minister Laurent Fabius has called for the UN Security Council to hold an emergency meeting over the situation. Christian 'catastrophe' Kurdish forces, known as the Peshmerga, have been fighting the IS militants' advance for weeks. The Peshmerga's commander in Qaraqosh reportedly told the town's archbishop late on Wednesday that the forces were abandoning their posts. Several senior clergymen in Nineveh confirmed the town had fallen. "It's a catastrophe, a tragic situation: tens of thousands of terrified people are being displaced as we speak," said Joseph Thomas, the Chaldean archbishop of the northern city of Kirkuk. Eyewitnesses in Qaraqosh said IS militants were taking down crosses in churches and burning religious manuscripts. The town - referred to as Iraq's Christian capital - is located 30km south-east of the city of Mosul, which was captured by IS in June. Iraq's minorities Christians The majority are Chaldeans, part of the Catholic Church Numbers have fallen from around 1.5 million since the US-led invasion in 2003 to 350,000-450,000 In Nineveh, they live mainly in towns such as Qaraqosh (also known as Baghdida), Bartella, Al-Hamdaniya and Tel Kef Yazidis Secretive group whose origins and ethnicity are subject to continuing debate Religion incorporates elements of many faiths, including Zoroastrianism Many Muslims and other groups view Yazidis as devil worshippers There are estimated to be around 500,000 Yazidis worldwide, most living in Iraq's Nineveh plains Last month, hundreds of Christian families fled Mosul after the Islamist rebels gave them an ultimatum to convert to Islam, pay a special tax or be executed. Iraq is home to one of the world's most ancient Christian communities, but numbers have dwindled amid growing sectarian violence since the US-led invasion in 2003. Meanwhile, the UN said it was mobilising resources to assist Yazidis rescued from Mount Sinjar over the past 24 hours. Members of the religious group sought refuge there after IS overran the nearby town of Sinjar at the weekend. Almost 200,000 civilians have been displaced from the town, the UN Office for the Coordination of Humanitarian Affairs has warned. Those trapped on the mountain are facing dehydration, and 40 children are reported to have died already. "This is a tragedy of immense proportions, impacting the lives of hundreds of thousands of people," UN spokesman David Swanson said. "Many of the displaced are in immediate need of essential life-saving humanitarian items, including water, food, shelter and medicine."
Posted by Mike at 8:43 AM