Josephine McKenna Religion News Service August 28, 2014 The Catholic Church should make “unconventional couples” feel at home instead of making them targets of “de facto discrimination,” the leader of the Italian Bishops Conference and an ally of Pope Francis said this week. 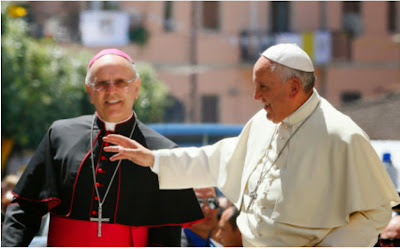 Pope Francis greets people as he visits Cassano allo Ionio, in Italy's Calabria region, June 21, 2014. On his left is Bishop Nunzio Galantino of Cassano allo Ionio. Photo by Paul Haring, courtesy of Catholic New Service “Couples in irregular matrimonial situations are also Christians, but they are sometimes looked upon with prejudice,” said Bishop Nunzio Galantino, an apparent reference to divorced and remarried Catholics. “The burden of exclusion from the sacraments is an unjustified price to pay, in addition to de facto discrimination,” he said Wednesday (Aug. 27) in an address to a national conference on liturgy in the Italian hill town of Orvieto. Galantino was Francis’ choice in March to lead the fractious Italian hierarchy, and from the beginning the bishop has adopted the pontiff’s inclusive approach. That has often landed Galantino in hot water, as he has spoken about the need for the church to welcome gays and to consider optional celibacy for the priesthood. But Galantino has not softened his views, which are especially newsworthy because in October the Vatican will host a major conference of the world’s top bishops, called a synod, to discuss issues facing the modern family. How to deal with gay and cohabiting couples is a likely topic of discussion, but the question of whether Catholics who have divorced and remarried without an annulment can take Communion has emerged as a focal point of disputes among bishops. That’s because the issue is a test case of whether the church under Francis will, or can, change its policies relating to the central sacrament of Communion. Some say such a change is impossible, while others say that changes are not only possible but imperative given that so many couples have divorced and remarried and feel alienated from the church. Galantino’s remarks were widely reported in Italian media, including Avvenire, the official newspaper of the Italian hierarchy, and were translated by the Italian news agency ANSA. In his talk, Galantino, who is secretary-general of the Italian Bishops Conference, stressed that everyone should “feel at home” in the church, and especially at Mass — including migrants, the disabled, the poor and those in unconventional relationships. He spoke about the need for churches to make their buildings accessible for those with disabilities, for example, and said Catholics should take care that the poor are not treated differently from the wealthy at Mass. But he appeared to send a strong message about divorced and remarried Catholics who are excluded from the sacraments. “They live in their situation with great suffering,” he said, “and they perceive the church’s regulations as very severe, not compassionate if not punitive.”
Posted by Mike at 1:23 PM