Catholic News Service August 4, 2015 A German cardinal warned that the number of Catholics leaving his country's church is "alarmingly high" and urged an end to "scandals and vexations" involving clergy. "There's no doubt these figures must make us think. We've obviously suffered a loss of trust and credibility which has rarely happened so violently," Cardinal Karl Lehmann of Mainz wrote in a column published in the Aug. 3 issue of Faith and Life, the diocese's weekly newspaper. 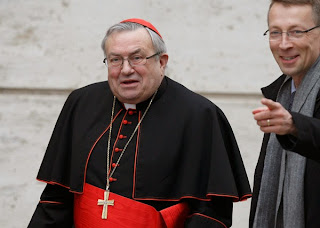 Cardinal Karl Lehmann arrives with an aide to one of last year's pre-conclave sessions at the Vatican to discuss the qualities needed for a new pope. (CNS/Paul Haring) "The church isn't just another club, and all efforts must now be made to prevent more scandals through repentance and renewal," wrote Cardinal Lehmann, a former president of the German bishops' conference. The column followed the release of new church data that showed a sharp increase in Catholics removing their names from parish and diocesan membership rolls. Catholics made up 29.9 percent of Germany's population of 82 million in 2013, according to church figures published July 18. In comparison, 29 percent of Germans claimed membership in the Protestant Evangelical Church of Germany. Registered departures slowed during the 2005-2013 pontificate of German Pope Benedict XVI, but jumped again to nearly 179,000 last year, from more than 118,000 in 2012. More than 10,000 Catholics joined or rejoined the church during the year, according to church data. Departures doubled to nearly 8,000 in the troubled Limburg Diocese, where Bishop Franz-Peter Tebartz-van Elst resigned in March after controversy emerged over expenditures for his residence and a diocesan center. The church reported that Sunday Mass attendance dropped from 11.7 percent to 10.8 percent of Catholics during the year, compared to 22 percent in 1989. Church baptisms and marriages also fell. In addition, the number of Catholic parishes dropped during 2013 by 137 to just over 11,000 after several of the country's 27 dioceses launched reorganizations to cope with declining membership. Presenting the report, Cardinal Reinhard Marx of Munich and Freising, president of the German bishops' conference, said the statistics should be a wake-up call to the German church about the need for "good and convincing work to rebuild confidence at all levels." A German sociologist, Michael Ebertz, told the Catholic news agency KNA he also believed the abuse and Limburg scandals had caused the rise in departures, despite much-publicized countermeasures subsequently taken by the German bishops. The "positive example" set by Pope Francis appeared unable to prevent "a high potential for disappointment among Catholics," he said. Formal resignations from church membership were often "the final stage of a long process of distancing from it," he said.
Posted by Mike at 12:36 PM