Synod is split on issue of divorce 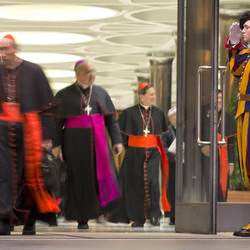 The Extraordinary Synod on the Family is tackling the issue of remarried divorcees head on. The Synod Fathers have been dealing with the issue – which had emerged occasionally in previous discussions – since yesterday afternoon as they work their way through the Instrumentum Laboris, the Synod’s working document. “Participation peaked” during this very “passionate” debate, with the Synod split down the middle, between those in favour of allowing remarried divorcees to take communion in certain cases and others against. Both sides, however, are faithful to Jesus’ teaching on mercy and support the indissolubility of marriage. It is not yet time to take official counts, we don’t count who is “for” and who “against” at the Synod, Vatican spokesman, Fr. Federico Lombardi said. Two main lines of argument emerged during the daily press briefing. One “insists on what the Gospel says about marriage: if a first marriage is valid, a remarried divorcee cannot be admitted to the sacraments, as there needs to be coherence between doctrine and faithfulness to the word of the Lord. The other line of reasoning recalls that “Jesus sees human experiences with a merciful eye” and “takes into account” the “differences” in each “specific case”, which would make access to the Eucharist possible in some cases. Nevertheless, “even those who are most concerned about the preservation of the doctrine, are far from shut off to the suffering of people facing difficult situations.” Likewise, those who are open to allowing access to communion “do not in any way deny the indissolubility of marriage.” This open attitude is reflected in the summaries of the debates that took place yesterday afternoon and this morning. The Holy See published these today, as usual without specifying which Synod Father presented which issue. During yesterday’s debate “a strong emphasis was placed on the importance of respecting remarried divorcees because they often find themselves in uncomfortable situations and subjected to social injustice; they suffer in silence and in many cases, attempt to gradually go back to becoming full participants in Church life. So pastoral care must not be repressive but full of mercy.” During yesterday evening’s open debate, the Synod’s participants said “it is important to carefully avoid making any moral judgment and speaking of a ‘permanent state of sin’.” Instead, an effort should be made to understand that not being admitted to the sacrament of the Eucharist does not completely rule out the possibility of Christ’s grace but is rather linked to the objective reality of a previous indissoluble sacramental bond. Hence, emphasis has often been given to the importance of spiritual communion. However, it should also be underlined that these proposals are not problem-free. There is no ‘easy’ solution to this issue.” Today “the reflections on the issue of access to the Eucharist for remarried divorcees continued.” The Synod’s participants stressed once again that marriage is indissoluble, stating that “each case needs to be considered individually.” They also reminded remarried divorcees that “just because they do not have access to the Eucharist does not in any way mean that they are not members of the Church community.” Fr. Lombardi said it is not possible at the moment to speak of a majority or minority vote, “we don’t count who is “for” and “against” during the Synod” and “taking counts based on participants’ speeches is absolutely out of the question” because the Church is on a knowledge-sharing journey and “everyone is listening with interest and respect.” The debates that have taken place between yesterday and today have been “great, very intense and passionate.” Synod Fathers have not only been addressing the presidents but also the Synod Fathers directly, said Fr. Rosica, the English-language spokesman for the Synod. During the news briefing, the President of the Pontifical Council for Legislative Texts, Cardinal Francesco Coccopalmerio, explained that there are three possibilities being discussed by the commission Francis set up in August – and headed by Mgr. Pio Vito Pinto – “with the purpose of simplifying and speeding up marriage annulment procedures”. These are: to eliminate the current requirement for two judiciaries to approve the annulment, the need for a “collegial judge” and finally, the “administrative procedure”, in other words the annulment approved directly by a local bishop in cases where a marriage is definitely null, the bishop knows the two individuals concerned, personally, and knows them to be trustworthy. But this does not mean the Catholic Church plans on introducing divorce as an option. During the discussions, there was an emphasis on the importance of “respecting and not discriminating against gay people”. Cardinal Coccopalmerio stressed that the Church does not accept same-sex marriage or the blessing of such unions, but it respects them. Regarding remarried divorcees, Coccopalmerio said “we must adopt the Pope’s line of thinking: to protect the doctrine but to look at each person’s situation, their needs and suffering individually” and “offer solutions to real people who are faced with serious situations that require an urgent response.” Cardinal André Vingt-Trois opened this morning’s session by reiterating the Catholic Church’s doctrine on contraception in a secularized world. Among the many themes addressed during today’s discussions, were: paternal responsibility, “the seriousness of a crime like abortion”, violence in the family, polygamy, improved preparation for marriage, pastoral care for children and the significant way in which the family has evolved since the last Synod held in 1980, on the theme “The Christian Family”.
Posted by Mike at 10:09 AM