Scandals of the 'playboy priests' of Italy's most gossiped about diocese 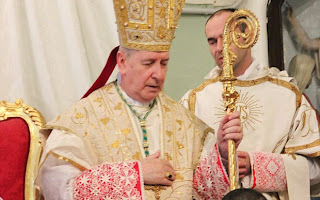 Pope Francis has ordered an investigation into Northern Italy's scandal-hit Albenga-Imperia diocese, where "playboy priests" have been accused of multiple crimes and misdemeanors over the past 25 years. Described by one Italian newspaper as “the most gossiped about diocese in Italy”, it has been run for the last 25 years by Bishop Mario Oliveri, 70. While the bishop himself is not accused of any wrongdoing, he is reported to have recruited “black sheep” priests with distinctly chequered pasts. Given the number of lurid accusations which have since surfaced, this appears to have spectacularly backfired. But what exactly have the priests been accused of? • Posting nude photos of themselves on Facebook and gay websites • Raiding church coffers and stealing communion money • Sexually harassing parishioners and courting the ‘prettiest’ faithful • Priest accused of having courted married woman during a procession • Living in secret with gay partners • Getting tattooed • Moon-lighting as barmen and sleeping with co-workers Several priests from the diocese have also been convicted or investigated of the following: • One priest found guilty and jailed for four years for organising an under-age prostitution ring • Several priests convicted or investigated for child abuse
Posted by Mike at 4:27 PM