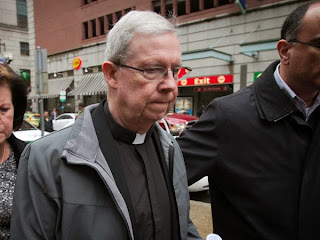 The Pennsylvania Supreme Court on Thursday set Nov. 18 to hear oral argument on the Philadelphia District Attorney’s petition to reinstate the child endangerment conviction of Msgr. William J. Lynn, the first Roman Catholic Church official charged in the clergy child sex-abuse scandal. The high court will hear the appeal in Harrisburg in the court’s main courtroom in the Capitol. At issue before the state’s highest court is the contested key legal theory underpinning the landmark 2012 prosecution of Lynn, 63, who as the Archdiocese of Philadelphia’s former secretary for clergy was the official responsible for investigating and recommending punishment for priests accused of sexual and other misconduct. In July 2012, after a 13-week trial and 12 days of deliberations, a Common Pleas Court judge sentenced Lynn to three to six years in prison. He immediately went into custody. The jury found that Lynn allowed the Rev. Edward V. Avery, who had a history of sexually abusing children, to live in a Northeast rectory where he later assaulted a 10-year-old altar boy. Avery pleaded guilty in the 1999 attack and is serving up to five years in state prison. But last Dec. 26, a three-judge Superior Court panel reversed Lynn’s conviction. Lynn was released from prison Jan. 2 after the Archdiocese of Philadelphia posted the required 10 percent of his $250,000 bail. He lives in the rectory of St. William, a parish in Lawncrest, on electronically monitored house arrest. The Superior Court panel agreed with Lynn’s attorneys that his conviction could not be affirmed under the original child-endangerment law or the amended version enacted in 2007. Lynn’s lawyers argued that the pre-2007 version required direct personal supervision of a child while Lynn was just a “supervisor of a supervisor.” But the post-2007 law, which enabled prosecution of church officials for crimes committed by priests they supervised, cannot be retroactively applied to Lynn, who left the clergy secretary post in 2004 after 12 years. The District Attorney’s Office has argued that the Superior Court wrongly interpreted the original child-endangerment statute to mean “direct supervision.”
Posted by Mike at 6:30 PM