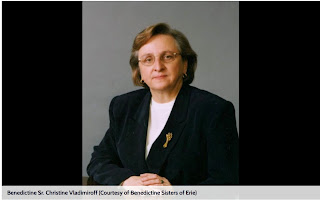 Benedictine Sr. Christine Vladimiroff, who as prioress in 2001 refused to follow a Vatican order that she prohibit another member of her community from speaking at a conference advocating ordination of women, died Sept. 25 at Mount St. Benedict Monastery in Erie, Pa., following a long illness. She was 74. Vladimiroff, an accomplished woman who earned a doctorate from the Universidad Internacional in Cuernavaca, Mexico, and who did postgraduate studies at several U.S. universities, was a teacher and administrator at various points in her career at the elementary, secondary and college levels. In the 1980s, she served first as multicultural coordinator and later as secretary of education for the Cleveland diocese. In 1991, she was appointed president and CEO of the Second Harvest National Food Bank Network in Chicago. She remained in that position until 1998, when she was elected prioress of the Erie community. She became most widely known, however, for leading her community through a high-profile confrontation with the Vatican in 2001. In March of that year, she received an ominous communication from the Vatican's Congregation for Institutes of Consecrated Life and Societies of Apostolic Life, ordering her to "forbid and prohibit" Benedictine Sr. Joan Chittister from participating as a principal speaker at a conference on women's ordination scheduled for late June in Dublin.
Posted by Mike at 10:20 AM