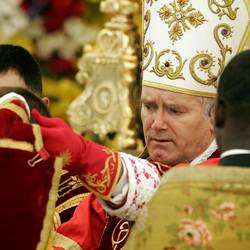 n an interview with authoritative French weekly magazine Famille Chrétienne, the Secretary of Pontifical Commission Ecclesia Dei, Guido Pozzo, discussed the state of relations between Rome and the Society of St. Pius X following Mgr. Fellay’s recent meeting with the Prefect of the Doctrine for the Faith. From the interview, it would seem that the Holy See does not intend to put any pressure on Mgr. Lefebvre’s followers but would like an agreement to be reached, although the timeframe for this is uncertain. What we are given to understand here, is that Rome intends to show greater flexibility on any aspect that does not regard doctrine. In 2009 Benedict XVI decided to revoke the excommunication of Lefebvrian bishops who had been illicitly ordained by Mgr. Lefebvre in 1988. This was a first and essential step toward the resumption of a constructive dialogue. Just a first step, however, because there were still some big doctrinal questions which needed to be addressed. The Ecclesia Dei Commission which has close links with the Congregation for the Doctrine of the Faith, is the main instrument in this dialogue process. Perhaps the most interesting part of the interview is that which addressed the sticking points in said dialogue. Mgr. Pozzo underlined that “any reservations or positions the Society of St. Pius X may have regarding aspects which are not related to faith but to pastoral questions or the prudential teaching of the Magisterium do not necessarily need to withdrawn or relinquished.” Here Rome seems to be showing an attempt to alter positions expressed in the past: According to Mgr. Pozzo, the fraternity’s reservations are linked to “aspects of pastoral care or the prudential teaching of the Magisterium.” The monsignor’s statement suggests that since these criticisms and reservations are no longer labelled as “doctrinal” the Lefebvrians could legitimately continue to express them. This approach is expressed more clearly in the following part of the interview: “The Holy See does not wish to impose a capitulation on the SSPX. On the contrary, it invites the fraternity to stand beside it within the same framework of doctrinal principles that is necessary in guaranteeing the same adhesion to the faith and Catholic doctrine on the Magisterium and the Tradition. At the same time, there is room for further reflection on the reservations the fraternity has expressed regarding certain aspects and the wording of the Second Vatican Council documents as well as some reforms that followed but which do not refer to subjects which are dogmatically or doctrinally indisputable.” Finally, one other very important clarification was made: “There is no doubt that the teachings of the Second Vatican Council vary a great deal in terms of how authoritative and binding they are depending on the text. So, for example, the Lumen Gentium Constitution on the Church and the Dei Verbum on the Divine Revelation are doctrinal declarations even though no dogmatic definition was given to them”, whereas the declarations on religious freedom, non-Christian religions and the decree on ecumenism “are authoritative and binding to a different and lesser degree.” It is unclear how long this process is going to take: “I don’t think it is possible to say yet when this process will conclude,” Mgr. Pozzo said. Both sides are committed to taking things step by step. “There will be no unexpected shortcuts; the clearly stated aim is to promote unity through the generosity of the universal Church led by the successor of Peter.”
Posted by Mike at 9:43 AM